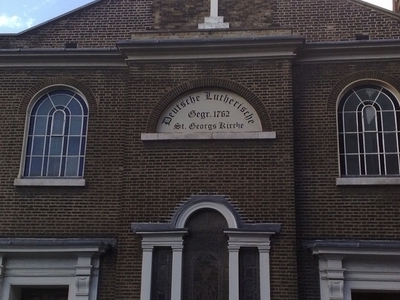 St George's German Lutheran Church is a church in Alie Street, Whitechapel. From its founding in 1762 until 1996 it was used by German Lutherans. It then became the headquarters of the Historic Chapels Trust. The church is still used for organ recitals. St George's was the fifth Lutheran church to be built in London. It is now the oldest surviving German Lutheran church in the UK. At the time, the street was called "Little Ayliffe Street" and the area was called "Goodman's Fields". The name of the street changed to "Alie Street" about 1800.

The founder was Dietrich Beckman, a wealthy sugar refiner. Beckman's cousin, Gustav Anton Wachsel from Halberstadt, became the first pastor. This area of Whitechapel had many sugar refiners of German descent in the nineteenth century and they constituted most of the congregation. From 1853 the churchyard and crypt were closed, and no longer accepted burials. At its height, there were an estimated 16,000 German Lutherans in Whitechapel. The last major influx of Germans was in the 1930s, when, during the Nazi period, the pastor, Julius Rieger, set up a relief centre for Jewish refugees. The theologian and anti-Nazi activist Dietrich Bonhoeffer preached here for a brief period in 1935.

The church retains a mostly original series of furnishings. These include a complete set of pews and a high central double-decker pulpit and sounding board. The coat-of-arms of King George III (pre-1801) and two carved timber commandment boards in German hang in the church. The Royal Arms were required to be erected in Anglican churches and were adopted by other churches as a mark of loyalty. The organ was built in 1886 by the Walcker family. They used the organ case of the previous organ (John England, 1794). When the organ was rebuilt in 1937, the case was reused.

Here's the our members favorite photos of "Churches near London Borough of Tower Hamlets". Upload your photo of St George's German Lutheran Church!