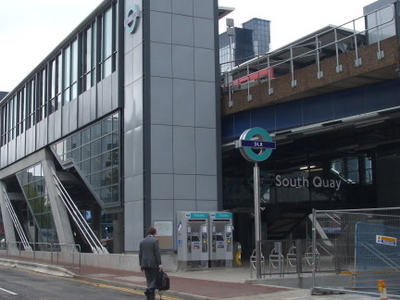 South Quay is a Docklands Light Railway station on the Isle of Dogs, in London. It is between Crossharbour and Heron Quays stations and is in Travelcard Zone 2. The original South Quay station opened in 1987, and was a standard DLR phase 1 elevated station, subsequently extended to permit the use of 2 car trains. The station was constrained by sharp curves at both ends and could not therefore be further extended on its former site. The DLR's plans to operate 3 car trains on this line therefore included the relocation of this station some distance to the east. In 1996, near the station, the Docklands bombing killed 2 people and injured over 30.

Here's the our members favorite photos of "Metro Stations near London Borough of Tower Hamlets". Upload your photo of South Quay DLR Station!

Going to South Quay DLR Station? Get answers from our friendly locals