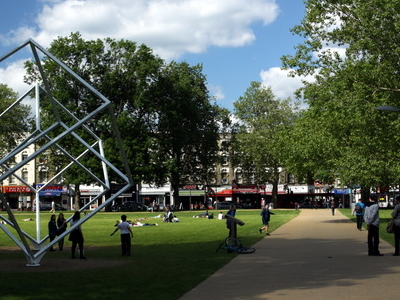 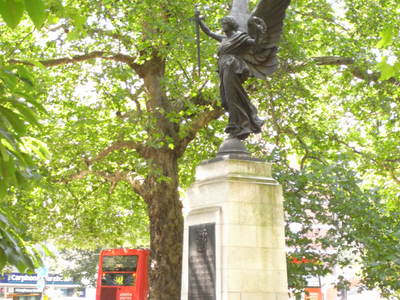 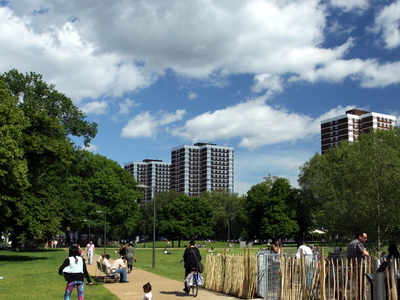 Shepherds Bush Green (also known as Shepherds Bush Common), is an approximately 8-acre (3.2 ha) triangular area of open grass surrounded by trees and roads with shops in Shepherd's Bush, an area of West London which takes its name from the Green.

On the north side of the Green is the Uxbridge Road, and beyond that the Westfield London shopping centre. To the east, the Green is bounded by the physical barrier of the West London railway line and the grade-separated West Cross Route (part of the aborted 1960s London Motorway Box scheme). The Holland Park Roundabout and the small Addison Bridge to the south are the only ways to cross this barrier.

To the east of the Green lies affluent and leafy Holland Park and Notting Hill; although the Edward Woods Estate just to the northeast of the roundabout is part of and managed by the London Borough of Hammersmith and Fulham, and is therefore more closely associated with Shepherds Bush.

Redevelopment:
The London Borough of Hammersmith and Fulham substantially re-developed Shepherd's Bush Green in 2013. The plans included creating two new play areas for children, the planting of further trees and a general improvement to routes across the Green for both cyclists and pedestrians. A proposal to create a new cafe was declined by the planning authorities.

The redevelopment of the Green was scheduled to be completed in time for the 2012 Summer Olympics but, apparently due to high levels of arsenic found in the soil by building contractors, the plans were substantially delayed.

An Inspire Mark (awarded by the London Organising Committee of the Olympic and Paralympic Games (LOCOG), making it part of the Cultural Olympiad) was given to public artworks created by artist Elliott Brook, entitled "Goaloids", which were installed on Shepherd's Bush Green for the duration of London 2012 and the Paralympic Games. These large unique rotating football related sculptures commemorate the history of Shepherd's Bush and White City, which hosted the 1908 Summer Olympics football. The London Borough of Hammersmith and Fulham is the only borough to have 3 football teams playing Premier League football.

Here's the our members favorite photos of "City Parks near Hammersmith and Fulham". Upload your photo of Shepherd's Bush Green!

Going to Shepherd's Bush Green? Get answers from our friendly locals

City Parks in Hammersmith and Fulham