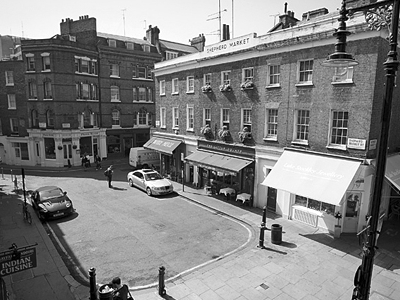 Shepherd Market is a small square in the Mayfair area of central London, developed in 1735-46 by Edward Shepherd on the open ground then used for the annual May fair from which Mayfair gets its name. It is located between Piccadilly and Curzon Street and has a village-like atmosphere. It has been associated with prostitutes since the Eighteenth century; in the 1980s, Jeffrey Archer met the prostitute Monica Coghlan in Shepherd Market. In the 1920s it was a popular residential area for writers and artists, such as Anthony Powell, Michael Arlen and Sophie Fedorovitch.

Here's the our members favorite photos of "Plazas and Squares near City of Westminster". Upload your photo of Shepherd Market!

Going to Shepherd Market? Get answers from our friendly locals