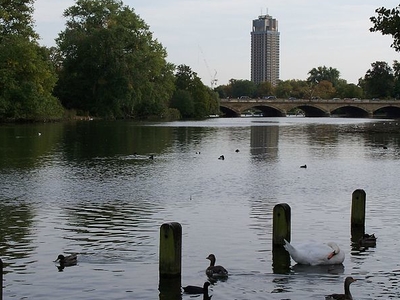 The Serpentine (also known as the Serpentine River) is a 40-acre (16.2 ha) recreational lake in Hyde Park, London, England, created in 1730 at the behest of Queen Caroline. Although it is common to refer to the entire body of water as The Serpentine, strictly the name refers only to the eastern half of the lake. Serpentine Bridge, which marks the boundary between Hyde Park and Kensington Gardens, also marks The Serpentine's western boundary; the long and narrow western half of the lake is known as The Long Water. The Serpentine is commonly thought to take its name from its snakelike, curving shape, although it only has one bend. The name is more correctly derived from the colour of the water and was named by Queen Caroline due to this observation.

The Long Water
At the northern end of The Long Water are five fountains surrounded by classical statuary and sculpture, the area is officially known as the Italian Gardens. A large bronze memorial to Edward Jenner, the developer of modern vaccination, dominates the area; it was originally located in Trafalgar Square in 1858, but four years later was moved to its present site. In recent years there has been an ongoing campaign for the memorial to be moved to the empty plinth in Trafalgar Square.

The Long Water is designated as a bird sanctuary. It has important populations of breeding waterfowls, and in winter there are many migratory visitors. A 2005 survey showed it as home to 90 species of moth alone. On the western bank of The Long Water, deliberately hidden in foliage, is a bronze sculpture of Peter Pan by George Frampton. The "real World" elements of the play and novel were set in the park and in the surrounding streets.

Recreation
Swimming: A rectangular swimming area on the southern bank was opened in 1930. Known as Lansbury's Lido, it is partitioned off from the rest of the lake by a perimeter of buoys. There is a fee for entering the lido, and changing rooms are available. It is normally open only in the summer, typically between 10:00 and 17:30, although members of the Serpentine Swimming Club may swim all the year round from 06:00 to 09:30.

Peter Pan Cup: Since 1864, the Serpentine has hosted a 100-yard (91.4 m) swimming competition every Christmas morning at 9 am. In 1904, author J. M. Barrie awarded the Peter Pan Cup to the winner of the race, a tradition which has continued ever since. Owing to the hazards of swimming in freezing water, the race is open only to members of the Serpentine Swimming Club.

Boating:Rowing boats are available for hire. In 2002 the Serpentine hosted the World Rowing Sprints, in which several international crews raced over 547 yards (500 m).

Solarshuttle:In the summer months, the Solarshuttle solar powered boat ferries passengers between the northern and southern banks of the Serpentine. At 48 feet (14 m) long and carrying 42 passengers, it is the largest wholly solar-powered passenger boat operating in the UK.

Landmarks
London's Holocaust Memorial is situated at the eastern end of the Serpentine, immediately beyond the dam. A memorial on the northern shore of the lake was erected by Norwegian seamen in 1978 in thanks for the safe haven they were given in Britain after their country surrendered to the Germans in 1940, during the Second World War.

The Diana, Princess of Wales Memorial Fountain is sited on the southern shore of the Serpentine near West Carriage Drive. Although it was beset by early problems and had to be closed for a month three weeks after it opened, it has become one of the UK's most popular attractions, with 800,000 visitors a year. The Serpentine Gallery nearby is also on the south bank.

On the northern side of the lake, opposite The Lido, is a grass amphitheatre known as The Cockpit. A disused gravel pit, it was the scene of the The Rolling Stones' "Stones In The Park" concert in 1969. This area can also be seen in the 1953 film Genevieve, as the starting point for the annual London to Brighton Veteran Car Run.

Here's the our members favorite photos of "Lakes in London". Upload your photo of Serpentine Lake!

Going to Serpentine Lake? Get answers from our friendly locals