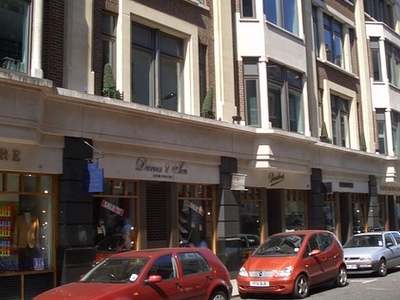 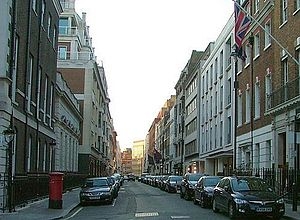 Savile Row is a street in Mayfair, central London. Known principally for its traditional bespoke tailoring for men, the street has had a varied history that has included accommodating the headquarters of the Royal Geographical Society at 1 Savile Row, where significant British explorations to Africa and the South Pole were planned; and more recently, the Apple office of the Beatles at 3 Savile Row, where the band's final live performance was held on the roof of the building.

Originally named Savile Street, it was built between 1731 and 1735 as part of the development of the Burlington Estate. It was designed under the influence of Burlington's interpretation of Palladian architecture, known as "Burlingtonian". Henry Flitcroft, under the supervision of Daniel Garrett, appears to have been the main architect - though 1 and 22-23 Savile Row were designed by William Kent. Initially, the street was occupied mainly by military officers and their wives; later William Pitt the Younger and Irish-born playwright and MP, Richard Brinsley Sheridan were residents.

Tailors started doing business in the area in the late 18th century; first in Cork Street, about 1790, then by 1803 in Savile Row itself. In 1846, Henry Poole, later credited as the creator of the dinner jacket or tuxedo, opened an entrance to Savile Row from his tailoring premises in Old Burlington Street. In 1969, Nutters of Savile Row modernised the style and approach of traditional Savile Row tailoring; a modernisation that continued in the 1990s with the "New Bespoke Movement", involving the designers Richard James, Ozwald Boateng, and Timothy Everest.

Traditional handmade bespoke suits, as of 2012, cost upwards of £2,000; customers have included Lord Nelson, Winston Churchill, and Jude Law. The term bespoke as applied to fine tailoring is understood to have originated in Savile Row, and came to mean a suit cut and made by hand; though, after a 2008 ruling by the Advertising Standards Authority, bespoke suits may be made by machine, as long as they are still made-to-measure.

Here's the our members favorite photos of "Famous Streets near City of Westminster". Upload your photo of Savile Row!

Going to Savile Row? Get answers from our friendly locals