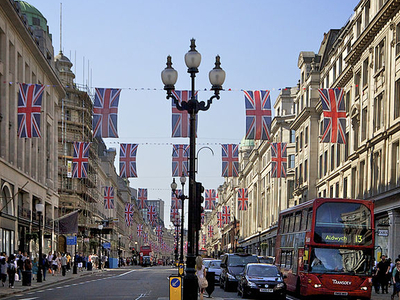 Regent Street is one of the major shopping streets in the West End of London, well known to tourists and locals alike and famous for its Christmas illuminations. It is named after the Prince Regent (later George IV) and is commonly associated with the architect John Nash, whose street layout survives, although all of his original buildings except All Souls Church have since been replaced.

The street was completed in 1825 and was an early example of town planning in England, cutting through the 17th and 18th century street pattern through which it passes. It runs from the Regent's residence at Carlton House in St James's at the southern end, through Piccadilly Circus and Oxford Circus, to All Souls Church. From there Langham Place and Portland Place continue the route to Regent's Park. Every building in Regent Street is protected as a listed building with at least Grade II status, and together they form the Regent Street Conservation Area.

Here's the our members favorite photos of "Famous Streets near City of Westminster". Upload your photo of Regent Street!

Going to Regent Street? Get answers from our friendly locals

Get in touch with 3 Touristlink members who want to visit Regent Street or with Paula López Alted, Arlette and 11 others who already have been here.