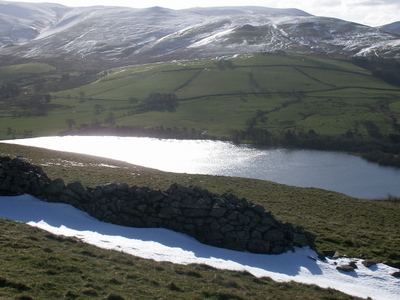 Over Water is a small lake or tarn in the north of the English Lake District near The Village of Longlands. Although only a fifteen-minute drive from Keswick it is quieter than many of the better-known lakes. Binsey, Great Cockup and Longlands Fell overlook the lake.

Over Water was a small natural waterbody which was dammed in 1904 to increase its capacity. It now serves as a drinking water reservoir to supply the town of Wigton. The dam is at the northern end. Over Water supports a range of flora including water lillies and water lobelia. The name of the tarn has developed and changed over time. It was recorded as 'Orre Water' in 1687, which derives from the Old Norse name 'Orri's tarn' which means 'the tarn where blackcock are found.'

Here's the our members favorite photos of "Lakes in Lake District National Park". Upload your photo of Over Water!

Going to Over Water? Get answers from our friendly locals