Our Lady of Perpetual Help Church 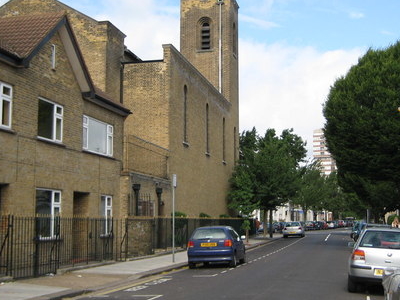 Our Lady of Perpetual Help Church is a Roman Catholic church in Fulham, in the London Borough of Hammersmith and Fulham. The church was designed by Benedict Williamson, an architect who later became a Catholic priest. It is situated on Stephendale Road and the parish house is situated on Tynemouth Street.

Interior:
Its soaring classical columns and Romanesque arches emphasizes the light and space of the church giving it a height and grandeur that make it look deceptively large. The church was built just after the discovery Tutankhamen’s tomb in Egypt, so there are interior details that reflect the fascination with Egyptian pictures from the time. The Stations of the Cross each have a meditation in their own right.

Here's the our members favorite photos of "Churches near Hammersmith and Fulham". Upload your photo of Our Lady of Perpetual Help Church!

Churches in Hammersmith and Fulham