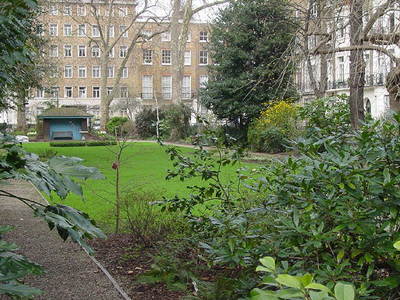 Montagu Square is a square in Marylebone, London. It is situated a little north of Marble Arch. It is oriented on an axis approximately NNW on the same grid plan that extends eastwards as far as Portland Place. Montagu Place runs along the north end, George Street along the south end. It measures about 225m × 40m.

It was built as part of the Portman Estate between 1810 and 1815 along with Bryanston Square, a little to the west, and first leased to the builder David Porter. He named the square after his former mistress when he was a chimney sweep, Mrs. Elizabeth Montagu. John Summerson describes the square as "a plain, uniform regiment of brown brick houses", comparing it unfavourably with Bryanston Square. The architect of both was Joseph Parkinson.

Here's the our members favorite photos of "Plazas and Squares near City of Westminster". Upload your photo of Montagu Square!

Going to Montagu Square? Get answers from our friendly locals

Emiliya Petrova is the only Touristlink member to visit Montagu Square. Have you been here? Click here to save it.