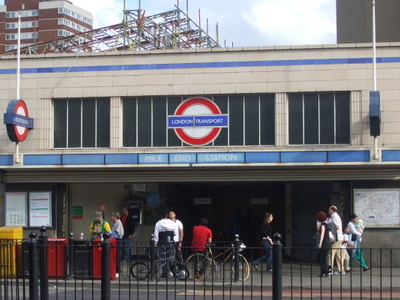 Mile End is a London Underground station in Tower Hamlets, East London, served by the Hammersmith & City, District and Central lines. It is in Travelcard Zone 2. The station was opened in 1902 by the Whitechapel & Bow Railway. Electrified services started in 1905. Services were provided by the District line with the Hammersmith & City line (then the Metropolitan line) following in 1936. In 1946 the station was expanded and rebuilt as part of the Central line eastern extension with services starting on 4 December 1946. The station passed to London Underground in 1950.

Here's the our members favorite photos of "Metro Stations near London Borough of Tower Hamlets". Upload your photo of Mile End Tube Station!

Going to Mile End Tube Station? Get answers from our friendly locals