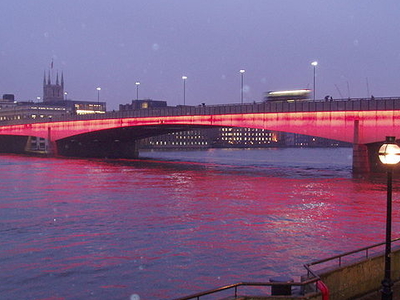 London Bridge is a bridge over the River Thames, connecting the City of London and Southwark, in central London. Situated between Cannon Street Railway Bridge and Tower Bridge, it forms the western end of the Pool of London. On the south side of the bridge are Southwark Cathedral and London Bridge station; on the north side are the Monument to the Great Fire of London and Monument tube station. It was the only bridge over the Thames downstream from Kingston until Putney Bridge opened in 1729. The current bridge opened on 17 March 1973 and is the latest in a succession of bridges to occupy the spot and claim the name.

Here's the our members favorite photos of "Bridges near City of London". Upload your photo of London Bridge!

Going to London Bridge? Get answers from our friendly locals

Connect with Mayara Bona, Agrifina Helga and 3 other members who have already visited London Bridge.

Bridges in City of London