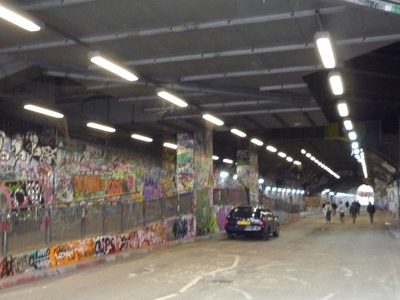 Leake Street, also known as the "Banksy Tunnel" or "Graffiti Tunnel", is a road in Lambeth, London. It is about 300 metres long, runs off York Road and under the platforms and tracks of Waterloo Station. The walls are decorated with graffiti - initially created during the "Cans Festival" organised by Banksy on 3rd-5 May 2008. A second edition of the Cans Festival on the August Bank Holiday week-end 2008. While the Eurostar terminal was at Waterloo, the road was open for through vehicular traffic. On 2008 November 14 ownership of the road passed from Eurostar to Network Rail and through traffic was restricted to pedestrians.

Here's the our members favorite photos of "Famous Streets near London Borough of Lambeth". Upload your photo of Leake Street!

Going to Leake Street? Get answers from our friendly locals