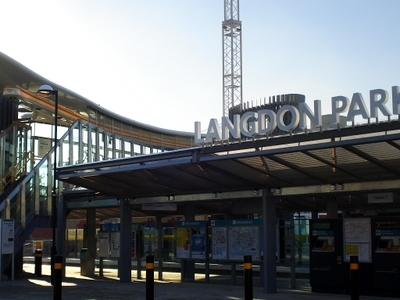 Langdon Park DLR station is a station on the Docklands Light Railway (DLR) in the East End of London. Situated between the existing All Saints and Devons Road stations, construction of the station began on 17 November 2006, and the first day of operation was 9 December 2007.

Since the start of the Docklands Light Railway, two station sites were safeguarded to be used much later when the system was developed. One of these stations was Pudding Mill Lane, which opened in 1996. The other station was provisionally called Carmen Street. However, this was changed to Langdon Park, following the name of the adjacent Langdon Park Secondary School as well as a local park.

Here's the our members favorite photos of "Metro Stations near London Borough of Tower Hamlets". Upload your photo of Langdon Park DLR Station!

Going to Langdon Park DLR Station? Get answers from our friendly locals