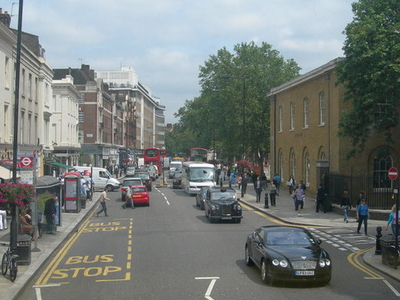 King's Road or Kings Road (or sometimes The King's Road, especially when it was the King's private road until 1830), is a major street stretching through Chelsea and Fulham, both in west London. It is associated with 1960s style, and fashion figures such as Mary Quant and Vivienne Westwood. Sir Oswald Mosley's Blackshirt movement had a Barracks on the street in the 1930s.

Location:
King's Road runs for just under 2 miles (3.2 km) through Chelsea, in the Royal Borough of Kensington and Chelsea, from Sloane Square in the east (on the border with Belgravia and Knightsbridge) and through the Moore Park estate on the border of Chelsea and Fulham opposite Stamford Bridge. Shortly after crossing Stanley bridge the road passes a slight kink at the junction with Waterford Road in Fulham, where it then becomes New King's Road, continuing to Putney Bridge; its western end is in the London Borough of Hammersmith and Fulham.

Here's the our members favorite photos of "Famous Streets near Kensington and Chelsea". Upload your photo of King's Road!

Going to King's Road? Get answers from our friendly locals