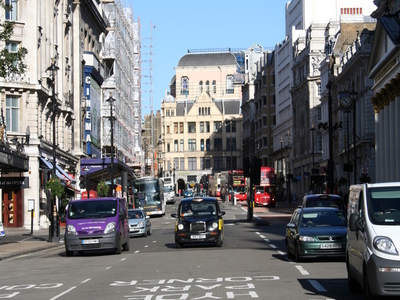 Haymarket is a street in the St. James's area of the City of Westminster, London. It runs from Piccadilly Circus in the north to Pall Mall at the southern end. It is the location of a variety of restaurants, the Theatre Royal and Her Majesty's Theatre, a cinema complex, and New Zealand House.

Haymarket Today:
Haymarket runs parallel to Lower Regent Street and together the two roads form a one-way system, Lower Regent Street taking northbound traffic and Haymarket taking southbound traffic. The two roads are classified as part of the A4 route from London to Avonmouth, near Bristol. On 29 June 2007, the Metropolitan Police Service "made safe" a car bomb that had been parked in Haymarket as part of the 2007 London attempted attacks.

Here's the our members favorite photos of "Famous Streets near City of Westminster". Upload your photo of Haymarket!

Going to Haymarket? Get answers from our friendly locals