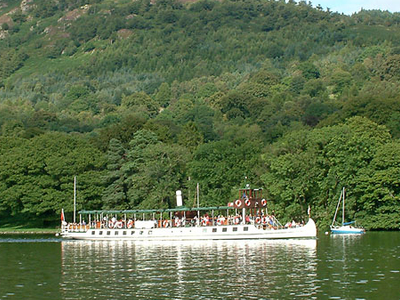 Gummer's How is a hill in the southern part of the Lake District, on the eastern shore of Windermere, near its southern end. How, derived from the Old Norse word haugr, is a common local term for a hill or mound. Although a relatively small hill (321 metres above sea level) by the standards of the Lake District, it is the highest of the foothills in the area, and commands excellent views, particularly along Windermere, but also across to the Coniston fells and the Central Fells, as well as the broad panorama of Morecambe Bay. There is an OS trig point on the summit.

The walk to the summit is usually from the road at Astley's Plantation car park, itself at over 200 metres above sea level, and only 700 metres from the summit. Although short and easy by most standards, and popular with families, it has many of the characteristics of a walk in the higher Lakeland fells, with some (short) steep slopes, rocks to negotiate, and rowan, bracken and heather. The lower slopes are forested, but the upper portion is moorland.

Here's the our members favorite photos of "Hills in Lake District National Park". Upload your photo of Gummer's How!

Going to Gummer's How? Get answers from our friendly locals