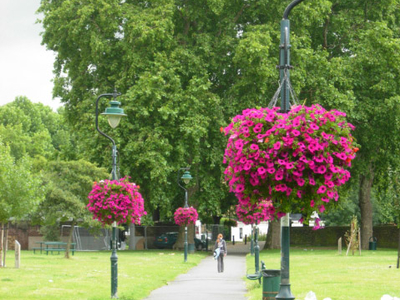 Geraldine Mary Harmsworth Park is a public park in Southwark, south London. It is maintained by the London Borough of Southwark and bounded by Lambeth Road, Kennington Road, St George's Road and Brook Drive. It covers an area of 5.9 hectares (15 acres).

Sports Facilities:
The Park's sports facilities include five-a-side football pitches, and netball, basketball and tennis courts. The provision of these facilities was supported by a £1.4 million grant from the Big Lottery Fund.

Memorials:
On 9 May 1999 a Soviet War Memorial was unveiled by the Secretary of State for Defence George Robertson, and the Russian ambassador Yuri Fokine. The date of the unveiling was significant as 9 May is marked as Victory Day in Russia. Since its inauguration the memorial has been the site of commemorations of Victory Day, Holocaust Memorial Day and Remembrance Sunday.

Also in May 1999 the Dalai Lama opened a Tibetan Peace Garden, commissioned by the Tibet Foundation, in the park. The garden features a bronze cast of the Kalachakra Mandala, contemporary western sculpture, and a Pillar inscribed with a message from the Dalai Lama in English, Tibetan, Hindi and Chinese.

On 30 October 2004, two Araucaria araucana ('monkey puzzle') trees were planted near the park's eastern gates in memory of two Chileans who were forcibly 'disappeared' in 1974 following a military coup in Chile. The plantings were part of the Chilean Human Rights International Project's 'Ecomemoria' campaign.

Here's the our members favorite photos of "Recreational Areas near London Borough of Southwark". Upload your photo of Geraldine Mary Harmsworth Park!

Going to Geraldine Mary Harmsworth Park? Get answers from our friendly locals