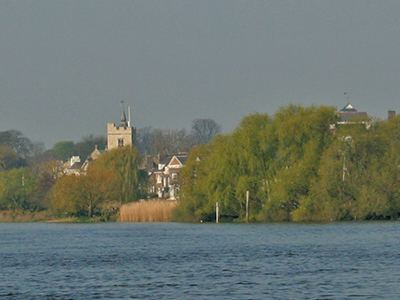 Chiswick Eyot is a small, narrow, uninhabited ait (island) in The River Thames. It is on the Tideway by Chiswick, in the Borough of Hounslow, London, England, and has an area of 1.1 hectares (2.7 acres). The island is beside The Championship Course and is a well-known landmark in the commentary on The Boat Race. A green pole stands on one end of the island, which is used for timings by rowers of that course, at the southwest, church end of the island. Small craft can pass between the island and the Chiswick Mall on the Middlesex bank for about two hours at high tide, but the small channel is generally impassable otherwise, and at low tide it is possible to walk across it to the island.

Chiswick Eyot was used during the industrial revolution mostly for the growing of grass and osiers (basket willows, used for basketry, furniture, cart-making, as well as cattle fodder). Much erosion has taken place, and it now becomes fully submerged (excluding trees) at high tide. The London Borough of Hounslow declared the island a Local Nature Reserve of Greater London in 1993. Prior to 1934 when ownership passed to the local council, Chiswick Eyot was owned by the Ecclesiastical Commissioners.

Chiswick Eyot is one of 43 unbridged tidal islands which can be walked to from the mainland of Great Britain, dating back to the British Iron Age such tidal islands are occasionally associated with being sanctuaries and meeting places; some are named Holy Islands. St. Nicholas Church, Chiswick is 200m west of the island on a slight rise by the river, the tower was built in the 15th century.

Here's the our members favorite photos of "Islands in London". Upload your photo of Chiswick Eyot!

Going to Chiswick Eyot? Get answers from our friendly locals