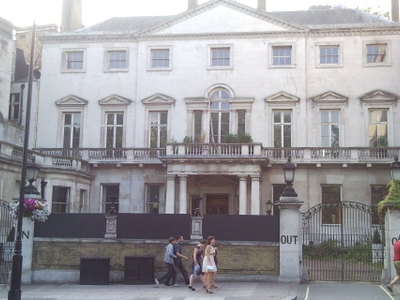 Cambridge House is a grade I listed mansion on the northern side of Piccadilly (Number 94) in central London, England, named after one of its owners, the Duke of Cambridge, 7th son of George III. It has also been known as Egremont House, Cholmondeley House, The Naval and Military Club, and the In and Out Club.

The house was built for Charles Wyndham, 2nd Earl of Egremont, by architect Matthew Brettingham in 1756-1761. It was initially known as Egremont House. The house is in a late Palladian style. It has three main storeys plus basement and attics and is seven bays wide. As is usual in a London mansion of the period the first floor (second floor in American English) is the principal floor, containing a circuit of reception rooms. This floor has the highest ceilings and its status is emphasised externally by a Venetian window in the centre.

Here's the our members favorite photos of "Historic Houses near City of Westminster". Upload your photo of Cambridge House!

Going to Cambridge House? Get answers from our friendly locals

Historic Houses in City of Westminster