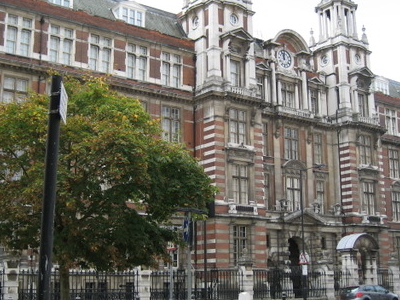 Blythe House is a listed building located at 23 Blythe Road, West Kensington, London Borough of Hammersmith and Fulham, UK. Originally built as the headquarters of the Post Office Savings Bank, it is now used as a store and archive by the Victoria and Albert, Science and British Museums.

The complex included a post office, "intended mainly to Deal with the extensive official correspondence involved in the work of the Savings Bank." The post office handled a ton of post (about 100,000 letters) every working day. The post office building still houses the West Kensington delivery office.

The main hall on the ground floor gave access to the offices of the Controller and his staff, and also the Public Enquiry Office. The first floor housed the correspondence branches, while the ledger branches were on the floors above. The top floor was mostly taken up with dining rooms and a kitchen. Approximately 1,000 of the staff were female; to avoid the risk of improper mixing of the sexes, females were segregated in the south block of the building, which had its own entrance.

Museum Stores:
In 1979 Blythe House was formally acquired by the Government from the Savings Bank for £6.5m, with the intention that it be used for storage by museums and galleries. A letter to the directors of the national galleries and museums garnered initial interest from the British Library, and the Natural History, British, Science and Victoria and Albert Museums. The British Library had previously expressed an interest in taking the whole building in place of their existing repository at Woolwich; the director of the V&A Sir Roy Strong had also lobbied for Blythe House to be used for the public display of several of his museum's collections: "Surely Blythe Road-which is a marvellous building-should be not just a dumping ground but an exciting new complex for the public."

Here's the our members favorite photos of "Key Buildings near Hammersmith and Fulham". Upload your photo of Blythe House!

Going to Blythe House? Get answers from our friendly locals

Key Buildings in Hammersmith and Fulham