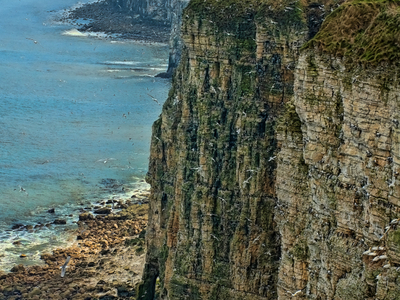 Bempton Cliffs is a nature reserve, run by the RSPB, at Bempton in the East Riding of Yorkshire, England. It is best known for its breeding seabirds, including Northern Gannet, Atlantic Puffin, Razorbill, Common Guillemot, Black-legged Kittiwake and Fulmar.
Location:
The hard chalk cliffs at Bempton rise are relatively resistant to erosion and offer lots of sheltered headlands and crevices for nesting birds. The cliffs run about 10 km from Flamborough Head north towards Filey and are over 100 metres (330 ft) high at points. There are good walkways along the top of the cliffs and several well fenced and protected observation points. Most times there will be helpful bird watchers with a range of scopes and binoculars on hand.
Gannets:
Bempton Cliffs is home to the only mainland breeding colony of Gannets in England. The birds arrive at the colony from January and leave in August and September.
Kittiwakes:
Numerically the most common bird, around 10% of the United Kingdom population of Kittiwakes (Rissa tridactyla) live here.
Puffins:
The Atlantic Puffins (Fratercula arctica) at Bempton Cliffs tend to nest in rock crevices, whereas burrows are used at most UK sites. For this reason, although there are estimated to be around 6,000 (2005) birds, it is relatively difficult to get a close view of them. Nevertheless, there are plenty to be seen in May and June. The Bempton puffins mostly fly 40 kilometres (25 mi) east to the Dogger Bank to feed. Their numbers may however be adversely affected by a reduction in local sand eel numbers caused by global warming, in turn caused by plankton being driven north by the 2 degree rise in local sea temperatures.

Here's the our members favorite photos of "Nature Reserves in Kingston upon Hull". Upload your photo of Bempton Cliffs!

Going to Bempton Cliffs? Get answers from our friendly locals