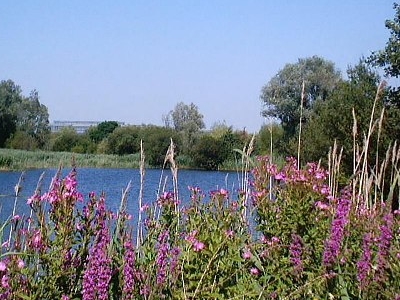 Bedfont Lakes Country Park is a 72.5 hectare Local Nature Reserve and Site of Metropolitan Importance for Nature Conservation in Bedfont in the London Borough of Hounslow.

The land was previously Fawn's Manor Farm, and was owned by the Duke of St Albans until it was purchased by William Sherborn in 1780. Until the 1920s it supplied London with produce, and gravel extraction took place from the 1860s. From the 1950s until 1973 it was used as a landfill site for domestic and industrial waste, and polluted lakes remained after it was closed. In 1988 Hounslow Council secured the development of the area as a country park as a planning condition for development of the surrounding area.

The site has lakes, wetlands, wildflower meadows and woodland. There are over 350 species of plants, including field scabious, lady's bedstraw and black poplar. There are also 156 species of birds, 124 of moths, 97 of fungi and 20 mammals. There are car parks in Bedfont Road and Clockhouse Lane.

Here's the our members favorite photos of "Nature Reserves in London". Upload your photo of Bedfont Lakes Country Park!

Going to Bedfont Lakes Country Park? Get answers from our friendly locals