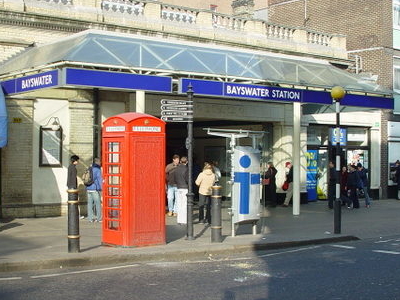 Bayswater is a London Underground station in the Bayswater area of the City of Westminster. It is served by the Circle and District lines. It's between Notting Hill Gate and Paddington stations, in Travelcard Zone 1. The station is located on Queensway and is close to Whiteleys shopping centre, Westbourne Grove, Queens ice rink and bowling centre, Kensington Gardens and St Sophia's Greek Orthodox Cathedral. Less than 100 metres away is the Central line's Queensway station.

The platforms of Bayswater station were constructed in the trench and provided with a glazed roof. A short section of the trench was left unroofed to the west of the station to allow smoke and steam from the trains to escape from the tunnels. Even before the completion in 1884 of the continuous circuit of tracks which are now the Circle line, the MR and MDR operated services through Bayswater as the Inner Circle. The MR originally provided all of the trains, but from 1871, each company operated half of the service.

Here's the our members favorite photos of "Metro Stations in London". Upload your photo of Bayswater Station!

Going to Bayswater Station? Get answers from our friendly locals

Ramin Randeniya is the only Touristlink member to visit Bayswater Station. Have you been here? Click here to save it.