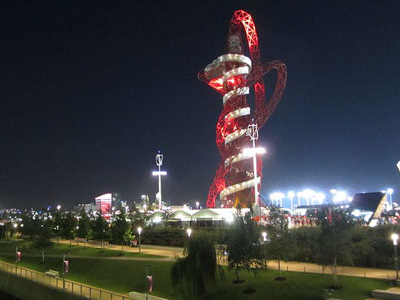 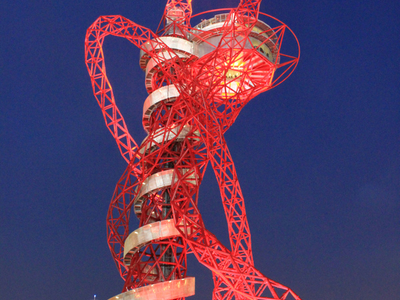 The ArcelorMittal Orbit is a 114.5 metre (376 feet) tall sculpture and observation tower in the Queen Elizabeth Olympic Park in Stratford, London. It is Britain's largest piece of public art, and is intended to be a permanent lasting legacy of London's hosting of the 2012 Summer Olympic and Paralympic Games, assisting in the post-Olympics regeneration of the Stratford area. Sited between the Olympic Stadium and the Aquatics Centre, it allows visitors to view the whole Olympic Park from two observation platforms.

Orbit was designed by Turner-Prize winning artist Sir Anish Kapoor and Cecil Balmond of engineering Group Arup. Announced on 31 March 2010, it was expected to be completed by December 2011. The project came about after Mayor of London Boris Johnson and Olympics Minister Tessa Jowell decided in 2008 that the Olympic Park needed "something extra". Designers were asked for ideas for an "Olympic tower" at least 100 metres (330 ft) high, and Orbit was the unanimous choice from proposals considered by a nine-person advisory panel.

The project was expected to cost £19.1 million, with £16 million coming from Britain's richest man, the steel tycoon Lakshmi Mittal, Chairman of the ArcelorMittal steel company, and the balance of £3.1 million coming from the London Development Agency. The name "ArcelorMittal Orbit" combines the name of Mittal's company, as chief sponsor, with "Orbit", the original working title for Kapoor and Balmond's design.

Kapoor and Balmond believe that Orbit represents a radical advance in the architectural field of combining sculpture and structural engineering, and that it combines both stability and instability in a work that visitors can engage with and experience via an incorporated spiral walkway. It has been both praised and criticised for its bold design. It has also been criticised as a vanity project, of questionable lasting use or merit as a public art project.

Here's the our members favorite photos of "Sculptures near London Borough of Hackney". Upload your photo of ArcelorMittal Orbit!

Going to ArcelorMittal Orbit? Get answers from our friendly locals

Love sculptures? Check these out;

Top Voted Sculptures Around the World