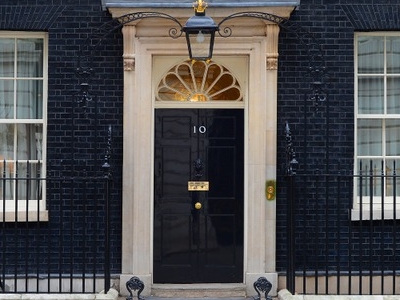 10 Downing Street, colloquially known in the United Kingdom as "Number 10", is the headquarters of the British Government and the official residence and office of the First Lord of the Treasury, an office now invariably held by the Prime Minister. Situated in Downing Street in the City of Westminster, London, Number 10 is one of the most famous addresses in the World. Over three hundred years old, the building contains about one hundred rooms. There is a private residence on the third floor and a kitchen in the basement.

The other floors contain offices and numerous conference, reception, sitting and dining rooms where the Prime Minister works, and where government ministers, national leaders and foreign dignitaries are met and entertained. There is an interior courtyard and, in the back, a terrace overlooking a garden of 0.5 acres (2,000 m2). Adjacent to St. James's Park, Number 10 is near to Buckingham Palace, the official London residence of the British monarch, and the Palace of Westminster, the meeting place of both Houses Of Parliament.

Originally three houses, Number 10 was offered to Sir Robert Walpole by George II in 1732. Walpole accepted on the condition that they be a gift to the office of First Lord of the Treasury rather than to him personally. Walpole commissioned William Kent to join the three houses together. It is this larger house that is known today as "Number 10 Downing Street".

The arrangement was not an immediate success. Despite its size and convenient location near to Parliament, few early Prime Ministers lived there. Costly to maintain, neglected, and run-down, Number 10 was close to being razed several times. Nevertheless, the property survived and became linked with many statesmen and events in British history. In 1985 Margaret Thatcher said Number 10 had become "one of the most precious jewels in the national heritage."

Here's the our members favorite photos of "Government Buildings near City of Westminster". Upload your photo of 10 Downing Street!

Going to 10 Downing Street? Get answers from our friendly locals

Government Buildings in City of Westminster