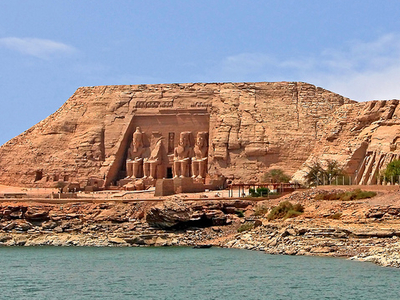 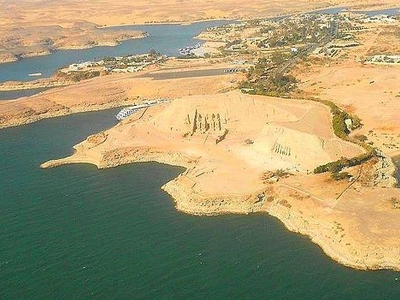 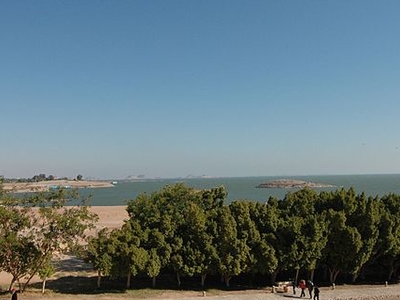 Abu Simbel is a village lying 280 km south of Aswan and only 40 km north of the Sudanese border. It is a very small settlement with very little to attract visitors other than its great temples for which it is famous. Few tourists linger for more than a few hours, although there are 5 hotels to attract visitors to stay the night.

The temples at Abu Simbel were formerly located further down the hillside, facing the Nile in the same relative positions, but due to the rising waters of Lake Nasser, the original locations are underwater. In the 1960's, each temple was carefully sawed into numbered stone cubes, moved uphill, and reassembled before the water rose.

The Great Temple of Ramses II was reassembled fronting a fake mountain, built like a domed basketball court, where the stone cubes occupy a section under the dome; from outside, the fake mountain looks like solid rock.

Archaeologists have concluded that the immense sizes of the statues in the Great Temple were intended to scare potential enemies approaching Egypt's southern region, as they travelled down the Nile from out of Africa.EgyptAir offers frequent flights to Abu Simbel from Aswan (up to four flights daily).

Here's the our members favorite photos of "Towns & Villages in Aswan". Upload your photo of Abu Simbel!

Going to Abu Simbel? Get answers from our friendly locals