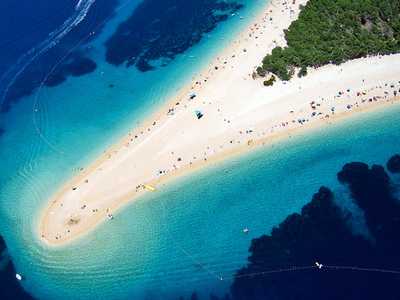 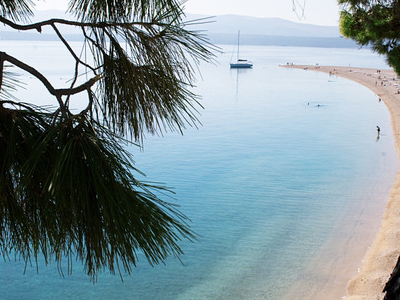 The Zlatni Rat, often referred to as the Golden Cape or Golden Horn (translated from the local Chakavian dialect), is a spit of land located about 2 kilometres (1 mile) west from the harbour town of Bol on the southern coast of the Croatian island of Brač, in the region of Dalmatia. It extends into the Hvar Channel, a body of water in the Adriatic Sea between the islands of Brač and Hvar, which is home to strong currents. The landform itself is mostly composed of a white pebble beach, with a Mediterranean pine grove taking up the remainder.

The beaches on either side of the spit extend for some 634 metres (2,080 ft) altogether, but the exact shape and length of the landform varies with regard to changes in tide, current, and wind. The farthest end, which is usually turned slightly towards the east, will often shift to the west in certain weather conditions, esp. a strong south-easterly Sirocco wind (known in Croatia as the Jugo). The surrounding waters are usually cool and very clear, due to the current in the Hvar Channel. The current is mildly hazardous for swimmers who decide to venture far directly southwards from the tip towards the open sea, as it could be difficult to swim back west towards the beach (the swimmer being effectively well over 150 meters from the coast); the danger is not severe, however, as the standard current would merely take the swimmer back east towards the harbor of Bol (and the beaches on the promontory of land that lies between Zlatni Rat and the town). A reliable afternoon westerly wind known as a Maestral has made the beach a destination for windsurfers.

The pine tree grove which borders the beach is home to the remnants of a Roman villa rustica, which included a swimming pool. The westernmost edge of the beach, and several coves to the west of the main beach, are traditionally clothing-optional. The promontory is protected as a geomorphological phenomenon.

Here's the our members favorite photos of "Natural Features near Bol". Upload your photo of Zlatni Rat!

Going to Zlatni Rat? Get answers from our friendly locals

Get in touch with 1 Touristlink members who want to visit Zlatni Rat or with Croatiantravelclub who already have been here.