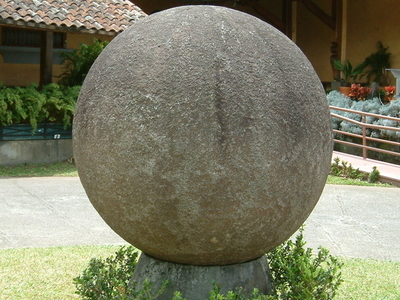 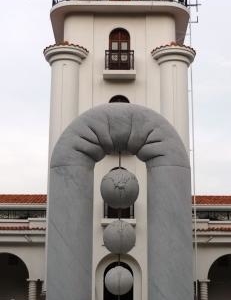 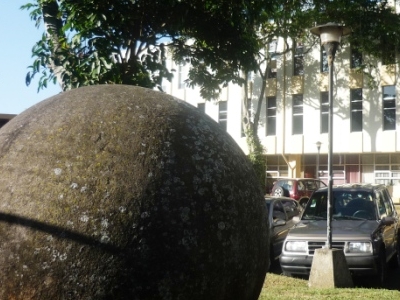 The stone spheres (or stone balls) of Costa Rica are an assortment of over three hundred petrospheres in Costa Rica, located on the Diquís Delta and on Isla del Caño. Locally, they are known as Las Bolas. The spheres are commonly attributed to the extinct Diquís culture and are sometimes referred to as the Diquís Spheres. They are the best-known stone sculptures of the Isthmo-Colombian area.

The Palmar Sur Archeological Excavations are a series of excavations of a site located in the southern portion of Costa Rica, known as the Diquís Delta. The excavations have centered on a site known as "Farm 6", dating back to the Aguas Buenas Period (300-800AD) and Chiriquí Period (800-1550 AD).

The spheres range in size from a few centimetres to over 2 metres (6.6 ft) in diameter, and weigh up to 15 tons. Most are sculpted from gabbro, the coarse-grained equivalent of basalt. There are a dozen or so made from shell-rich limestone, and another dozen made from a sandstone.

The archaeological site of Palmar Sur is located in the southern portion of Costa Rica, known as the Diquís Delta, and in the southernmost part of the Puntarenas Province. The Diquís Delta is defined as the alluvial plain with the geographical boundaries of the Fila Grisera to the north and east, the Pacific Ocean to the west, and the Osa Mountains comprising the southern boundary. This area is defined by two season: wet and dry. The dry season runs from December through March with the wet season comprising the remaining months.