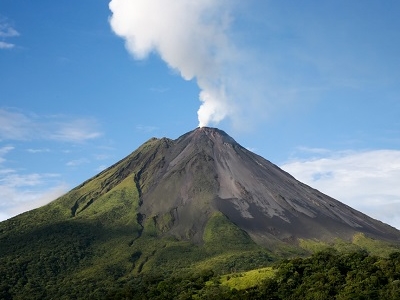 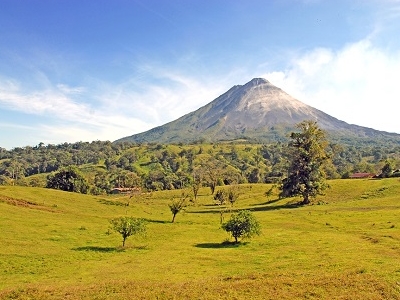 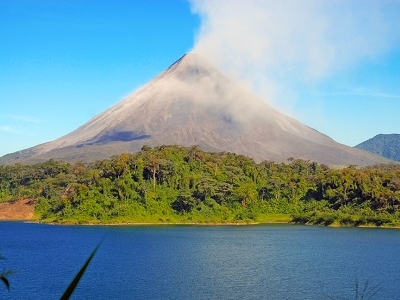 Arenal Volcano, in Spanish Volcán Arenal, is an active andesitic stratovolcano in north-western Costa Rica around 90 km northwest of San José, in the province of Alajuela, canton of San Carlos, and district of La Fortuna. The Arenal volcano measures at least 1,633 metres (5,358 ft),. It is conically shaped with a crater spanning 140 metres (460 ft). Arenal is geologically considered a young volcano and the age is estimated to be less than 7,000 years. It is also known as "Pan de Azúcar", "Canaste", "Volcan Costa Rica", "Volcan Río Frío" or "Guatusos Peak".

The volcano was dormant for hundreds of years and exhibited a single crater at its summit, with minor fumaroles activity, covered by dense vegetation. In 1968 it erupted unexpectedly, destroying the small town of Tabacón. Due to the eruption three more craters were created on the western flanks but only one of them still exists today. Since October 2010, Arenal's volcanic activity appears to be decreasing and explosions have become rare.

Geographic setting and description:
Arenal was Costa Rica's most active volcano until 2010, and one of the ten most active volcanoes in the World. It has been studied by seismologists for many years. Although the activity nowadays is less damaging, you can still see ash columns and hear underground rumbling. With its perfect conical shape it allows breathtaking views of volcanic action in the summit.

The volcano is located at the center of Arenal Volcano National Park in the northern zone of the country, 15 kilometres (9.3 mi) southwest of the La Fortuna district in San Carlos (canton), Costa Rica. The temperature varies from 9 °C (48 °F) in the high areas to 89 °C (192 °F) in the low areas and the annual rainfall is around 349 centimetres (137 in). Arenal Volcano area is an important watershed for the Arenal Lake Reservoir. The reservoir's water is used for hydroelectric power. It is also connected to the national system.

Geologic history:
Arenal is the youngest and most active of all the mountains in Costa Rica. Scientists have been able to date its activity back to more than 7000 years ago. The area remained largely unexplored until 1937, when a documented expedition took place to reach the summit. It has been considered eruptive since 1968.

Tourism:
The area around Arenal Volcano has traditionally been one of the most popular tourist destinations in Costa Rica. The area offered the opportunity to see lava running down the sides of the active volcano and hear its frequent small eruptions from a distance. Additionally, the area hosts several resorts built around hot springs and a broader tourist infrastructure that offers many of the activities available in Costa Rica—including whitewater rafting, zip line/canopy tours, wildlife viewing, waterfall rapelling, hiking, caving, and horseback riding.

Going to Arenal Volcano? Get answers from our friendly locals

Get in touch with 4 Touristlink members who want to visit Arenal Volcano or with Taheerah Mack-Jones, Joe Downes and 10 others who already have been here.