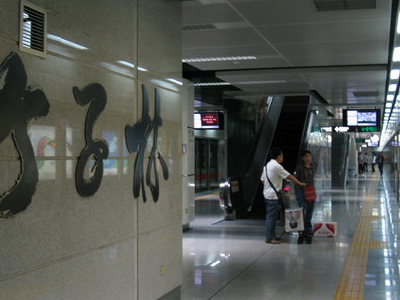 Zhuzilin Station (Chinese: 竹子林站), literally means Bamboo Forest Station in English, is a station of Shenzhen Metro Luobao Line. It started operations on 28 December 2004. It is located at the underground of the junction of Guangshen Expressway (Chinese: 广深高速公路) and west of Shennan Dadao (Chinese: 深南大道) in Futian District, Shenzhen, China. Besides two rail tracks for Luobao Line, there is an extra track to a depot called "Zhuzilin Depot" (Chinese: 竹子林车辆段) for operations control centre and maintenance workshop.

Here's the our members favorite photos of "Metro Stations near Futian". Upload your photo of Zhuzilin Station!

Going to Zhuzilin Station? Get answers from our friendly locals