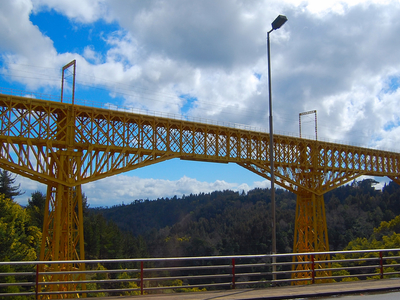 The Malleco Viaduct is a railway bridge located in central Chile, passing over the Malleco River valley at the south entrance of Collipulli in the Araucania Region. It was opened by President Jose Manuel Balmaceda on October 26, 1890. At that time, it was the highest such bridge in the World.The Panamerican Highway passes right next to the viaduct.

Here's the our members favorite photos of "Bridges in Collipulli". Upload your photo of Malleco Viaduct!

Going to Malleco Viaduct? Get answers from our friendly locals

Cecilia Baudrand is the only Touristlink member to visit Malleco Viaduct. Have you been here? Click here to save it.