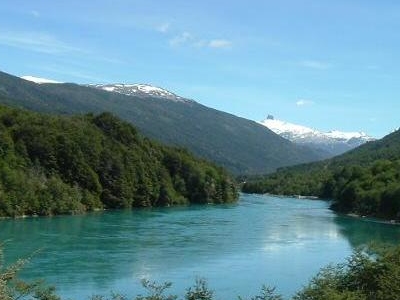 The Baker River is a river located in the Aisen Region of the Chilean Patagonia. It is Chile's largest river in terms of volume of water. The river flows out of Bertrand Lake, which is fed by General Carrera Lake. It runs along the east side of the Northern Patagonian Ice Field and empties into the Pacific Ocean, near the town of Caleta Tortel. The river forms a delta, dividing into two major arms, of which only the northernmost one is navigable.

Its characteristic turquoise-blue color is due to the glacial sediments deposited in it. It is the site of an approved hydro-electric project by the Chilean- and Spanish-owned Endesa, the biggest hydro-electric project in the history of Chile. It will produce 2,400 MW for the Interconnected Central System (Sistema Interconectado Central, Chile's main grid), whose energy consumption increases by 6% every year.

Here's the our members favorite photos of "Rivers in Aisen". Upload your photo of Baker River!

Going to Baker River? Get answers from our friendly locals

Chile365cl is the only Touristlink member to visit Baker River. Have you been here? Click here to save it.