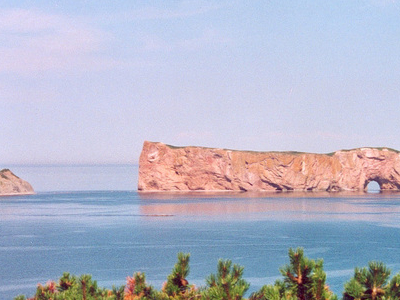 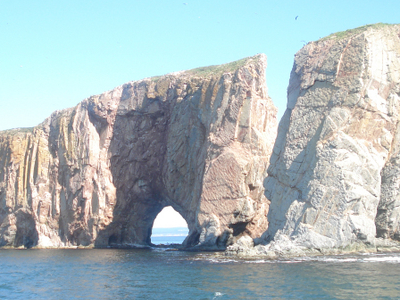 Percé Rock is a huge sheer rock formation in the Gulf of Saint Lawrence on the tip of the Gaspé Peninsula in Quebec, Canada, off Percé Bay. Percé Rock appears from a distance like a ship under sail. It is one of the World's largest natural arches located in water and is considered a geologically and historically-rich natural icon of Quebec. It is a major attraction in the Gaspesie region.

Percé Rock is a massive siliceous limestone stack formation, with sandstone and siltstone veins, with steep rock faces on all sides. It is 0.66 miles (1.06 km) long, 90 metres (300 ft) wide, and 88 metres (289 ft) high at its highest point. It is described as a narrow bluff emerging out of the sea, "resembling a bleached supertanker from some angles".

When it was seen in 1603 by the French geographer and founder of Quebec City, Samuel de Champlain, it had only one arch. However, in 1760, a picture of Percé Rock drawn by an English officer showed two arches, one of which collapsed in June 1845. Percé rock's two large holes were cut through by the sea waves. One of the holes seen now is an arch described as "gothic arch of rock", which is about 20 metres (66 ft) high. A small boat can pass through the arch during high tide. Of the two arches, the outer arch, which had collapsed with great force in 1845, is now seen as remnants in the form of an "obelisk".

Geography:
Percé Rock is part of the range of cliffs, bays and hills on the SW side of Mal Bay, which are formed of reddish-gold limestone and shale. It is linked to mainland (at Rue du Mont Joli) by a sandbar at low tide. The Bay of Perce is situated between this rock and the High Head. There is a reef to the SW of Percé Rock, about 0.5 miles (800 m) away from the shore. The town of Percé is located on the shores of the bay. Its main industry is fishing. Percé reef is about 0.5 miles (800 m) from the centre of the town where small vessels can be moored. Midway across the rock is a shoal that stretches over a length of 0.25 miles (400 m).

The rock formation has about 150 fossil species. In Bonaventure Island where the park is situated, conglomerates from the Carboniferous period of more than 310 million years are recorded.

Here's the our members favorite photos of "Geologic Features near Perce". Upload your photo of Perce Rock!

Going to Perce Rock? Get answers from our friendly locals

Love geologic features? Check these out;