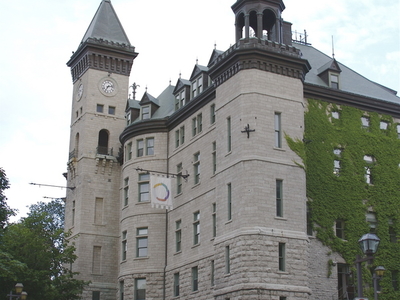 Old Quebec is a historic neighborhood of Quebec City, the capital of the province of Quebec in Canada. Comprising the Upper Town and Lower Town, the area is a UNESCO World Heritage Site. Administratively, Old Quebec is part of the Vieux-Québec–Cap-Blanc–colline Parlementaire district in the borough of La Cité-Limoilou. The area is sometimes referred to as the Latin Quarter, but this title refers more to area around the Séminaire de Québec, the original site of Laval University.

History
Old Quebec is the oldest part of Quebec City, chosen in 1608 by Samuel de Champlain as the location for the Chateau Saint-Louis. Old Quebec maintained a strong military and administrative presence from its beginning, a use determined by the strategic heights of Cap Diamant. While the Lower Town was populated with merchants and craftsmen, the Upper Town was inhabited by military officials and members of the clergy. This strong military presence long limited the city's expansion. At the end of the 19th century, many wanted to demolish the fortifications, judging them to be unnecessary and a hindrance to urban development. However, Governor Dufferin successfully managed to preserve the character of the walled city, while adapting the further expansion of the modern city.
Transportation
Public Transport
The Réseau de transport de la Capitale (RTC) operates the Écolobus loop service within Old Quebec. The Écolobuses are 100% electric, non-polluting and very quiet. The buses are much smaller than the RTC's regular fleet, accommodating 10 seated and 10 standing passengers.
Rail
Old Quebec is serviced by the Gare du Palais train and bus station. Built in 1915 by the Canadian Pacific Railway, the châteauesque station is similar in design to the Château Frontenac. Via Rail operates regular services to Montreal via Drummondville. The station is also serviced by the private coach company Orléans Express.
Air
Old Quebec is 16km east of Quebec's Jean Lesage Airport. There is no public transport between the airport and Old Quebec, however taxis operate at a flat rate of $34.
Recognition
In 1963, an area in the historic area of the city was named a "Declared Historic District" (French: Arrondissement historique décrété)' by the province of Quebec, and was expanded the following year to an area of 135 hectares (330 acres). It includes 1,400 buildings within the neighbourhood of La Cité, including the promonotary of Cap Diamant and a strip of band below the cliffs, between the Saint-Charles River and the Saint Lawrence River. In 1985, it was recognized as a World Heritage Site by UNESCO.

Here's the our members favorite photos of "Neighborhoods in Quebec City". Upload your photo of Old Quebec!

Going to Old Quebec? Get answers from our friendly locals