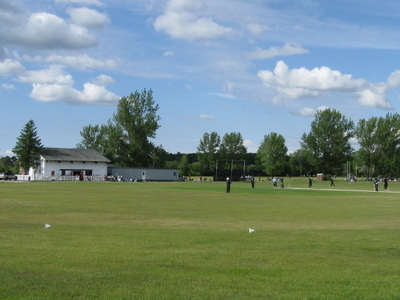 The Maple Leaf Cricket Club is a cricket ground in King City, Ontario, Canada, about 30 kilometres north of Toronto. It was established in 1954 and operates a turf wicket facilitys. In 2006, it became the second ground in Canada to be approved to host One Day Internationals (ODI) by the International Cricket Council. The facility has 5 cricket grounds. The North-West ground is the most important, and ODIs and Twenty20 Internationals have been played at this ground since the 2008 season.

The Maple Leaf Cricket Club has become the primary cricket venue in Canada, assuming the role from the Toronto Cricket, Skating and Curling Club. The facility has hosted major events in the past, including games in the 2001 ICC Trophy, two first-class matches in the 2006 ICC Intercontinental Cup, several games in the ICC Americas Championship tournaments of 2000 and 2006, and the 2008 Quadrangular Twenty20 Series.

Here's the our members favorite photos of "Cricket Fields in Toronto". Upload your photo of Maple Leaf Cricket Club!

Going to Maple Leaf Cricket Club? Get answers from our friendly locals