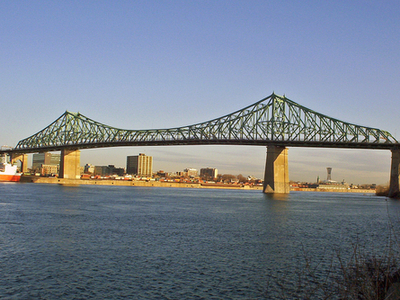 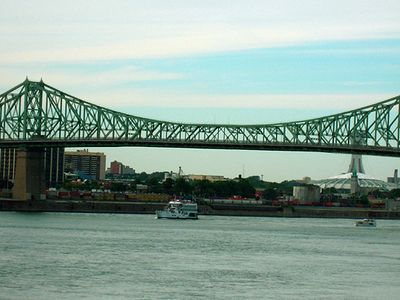 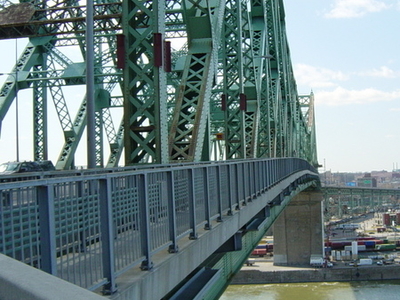 The Jacques Cartier Bridge (French: pont Jacques-Cartier) is a steel truss cantilever bridge crossing the Saint Lawrence River from Montreal Island, Montreal, Quebec to the south shore at Longueuil, Quebec, Canada. The bridge crosses Île Sainte-Hélène in the centre of the river, where offramps allow access to the Parc Jean-Drapeau and La Ronde amusement park.

Originally named the Montreal Harbour Bridge (pont du Havre), it was renamed in 1934 to commemorate the 400th anniversary of Jacques Cartier's first voyage up the St. Lawrence River.

The five-lane highway bridge is 3,400 m (11,236 ft) in length, including the approach viaducts. There are approximately 35.4 million vehicle crossings annually, making it the second busiest bridge in Canada that is operated by the Federal Bridge Corporation Limited, the first being Champlain Bridge, just a few kilometres upstream. It is the third busiest bridge in Canada overall after the Port Mann Bridge in Metro Vancouver (connecting Surrey to Coquitlam).

Together with Champlain Bridge, it is administered by the Jacques Cartier and Champlain Bridges Incorporated (JCCBI), a federal agency which is a fully owned subsidiary of the Federal Bridge Corporation Limited.

Events
During the summer season, the bridge is regularly completely closed to vehicular traffic for the fireworks competition held at La Ronde. It becomes foot traffic only, sometimes drawing crowds of 50,000+. In 2009 the competition runs fom mid-June till mid-August with events on Saturday nights only, commencing just before 10:00 PM. Bridge traffic is closed as of 8:00 PM, and is reopened when the bridge is cleared of pedestrians (usually between 11:00-11:30 PM).

Here's the our members favorite photos of "Bridges in Longueuil". Upload your photo of Jacques Cartier Bridge!

Going to Jacques Cartier Bridge? Get answers from our friendly locals