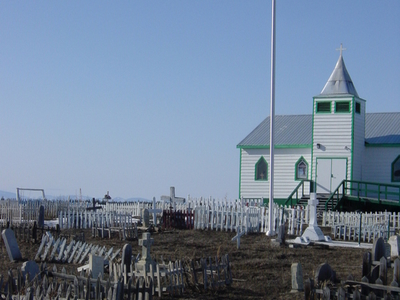 Fort McPherson is a hamlet located in the Inuvik Region of the Northwest Territories, Canada. It is located on the east bank of the Peel River and is 121 km (75 mi) south of Inuvik on the Dempster Highway. Population is 776 according to the 2006 Census, a slight increase over the 2001 Census count of 761. In 2009 the Government of the Northwest Territories reported that the population was 791 with an average yearly growth rate of -1.1 from 1996.

In the 2006 Census 715 people identified as aboriginal, 650 as North American Indian, 30 as Metis, 30 as Inuit or Inuvialuit, 10 giving multiple or other aboriginal responses and 55 Non-Aboriginal.The two principal languages spoken are Gwich'in and English. Fort McPherson is accessible by road all year from Dawson City and Whitehorse, Yukon, with the exception of spring break-up and fall freeze-up on the Peel River.

Here's the our members favorite photos of "Towns & Villages in Northwest Territories". Upload your photo of Fort McPherson!

Going to Fort McPherson? Get answers from our friendly locals