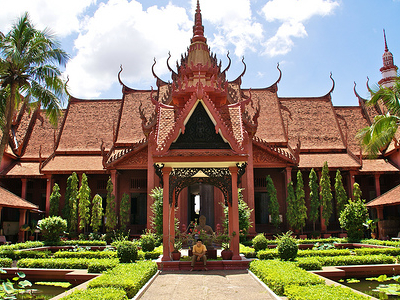 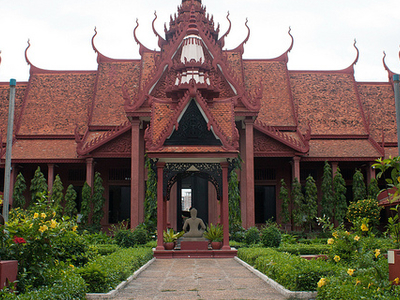 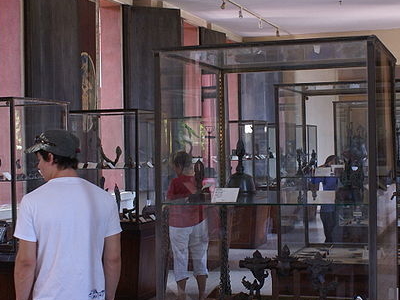 The National Museum of Cambodia (Khmer: សារមន្ទីរជាតិ, Sala Rachana) in Phnom Penh is Cambodia's largest museum of cultural history and is the country's leading historical and archaeological museum.

Overview
The museum houses is one of the World's largest collections of Khmer art, including sculptural, ceramics, bronzes, and ethnographic objects. The Museum’s collection includes over 14,000 items, from prehistoric times to periods before, during, and after the Khmer Empire, which at its height stretched from Thailand, across present-day Cambodia, to southern Vietnam.

History
George Groslier (1887–1945), historian, curator and author was the motivating force behind much of the revival of interest in traditional Cambodian arts and crafts, and it was he who designed this building that is today ‘traditional Khmer’ architecture. It is perhaps better described as a building enlarged from Cambodian temple prototypes seen on ancient bas-reliefs and reinterpreted through colonial eyes to meet the museum-size requirements.

The foundation stone for the new museum was laid on 15 August 1917. Some two-and-a-half years later, the completed museum was inaugurated during Khmer New Year on 13 April 1920 in the presence of H.M King Sisowath, François-Marius Baudoin, Résident-supérieur, and M. Groslier, director of Cambodian Arts, and Conservator of the museum.

Collections
Together with the adjacent Royal University of Fine Arts and its Department of Archaeology, the National Museum of Cambodia works to enhance knowledge of and preserve Cambodian cultural traditions and to provide a source of pride and identity to the Cambodian people. The Museum also serves a religious function; its collection of important Buddhist and Hindu sculpture addresses community religious needs as a place of worship. A permanent exhibition, Post-Angkorian Buddha, supported by UNESCO and a number of individuals and local businesses, opened in 2000 to extend the religious function of the Museum.

Here's the our members favorite photos of "Museums in Phnom Penh". Upload your photo of National Museum!

Going to National Museum? Get answers from our friendly locals

Get in touch with 2 Touristlink members who want to visit National Museum or with Deepak Nashine, True Travel and 14 others who already have been here.