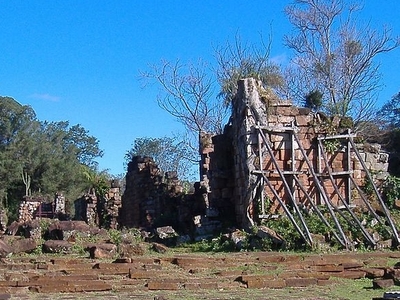 Reducción de Nuestra Señora de Santa Ana (Reduction of Our Lady of Saint Ana) was one of the many missions or reductions founded in the 17th century by the Jesuits in the Americas during the Spanish colonial period.The ruins of the Jesuit reduction founded in 1633 are located in the Candelaria Department of the Misiones Province, Argentina, only 2 kilometers away from the department's head Santa Ana, and not far from the San Ignacio Miní ruins. The complex of Jesuit reductions located both in Argentina and Brazil were declared World Heritage Sites by UNESCO in 1984.

Going to Nuestra Senora de Santa Ana? Get answers from our friendly locals

Get in touch with 2 Touristlink members who want to visit Nuestra Senora de Santa Ana or with Sonia Escalante who already have been here.