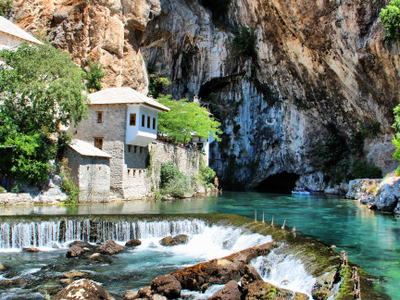 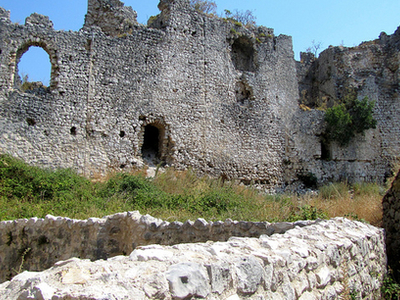 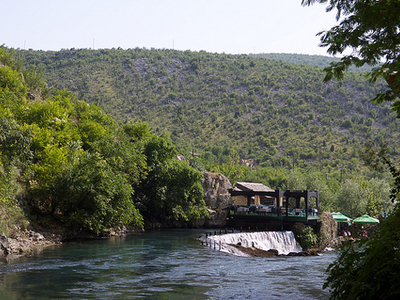 Blagaj is a village-town (kasaba) in the south-eastern region of the Mostar basin, in the Herzegovina-Neretva Canton of Bosnia and Herzegovina. It stands at the edge of Bišće plain and is one of the most valuable mixed urban and rural structures in Bosnia and Herzegovina, distinguished from other similar structures in its urban layout. Blagaj was most likely named for its mild weather patterns since "blaga" in Bosnian means "mild". Blagaj is situated at the spring of the Buna river and a historical tekke (tekija or Dervish monastery). The Blagaj Tekija was built around 1520, with elements of Ottoman architecture and Mediterranean style and is considered a national monument.

The source of the Buna river (Vrelo Bune) is a strong karstic spring. The river flows west for approximately 9 kilometres and joins the Neretva near the village Buna. The historic site of the Old Blagaj Fort (Stjepan grad), on the hill above Blagaj, was the seat of Herzegovinian nobleman, Stjepan Vukčić, and the birthplace of Bosnian queen Katarina Kosača-Kotromanić.

Architecture:
The earliest Blagaj settlement was located at the foot of the Blagaj fort, where the road runs down from the fort and intersects with the Nevesinje road. There was too little trade for a commercial centre to emerge and in an agricultural environment of this kind the circumstances did not give rise to an urban settlement.The urbanization of the area (in the form we know today) was defined in the second half of the 15th century, and its structure was shaped during the 16th century.

Historical sources frequently refer to mediaeval fortress Blagaj Fort (Stjepan grad) as a distinct territorial entity. During the Ottoman period construction of buildings was initiated in the fortress outskirts (houses and public edifices. The residential areas were formed as urban quarters or mahalas, with buildings facing inwards - onto their courtyards.

Resident complexes display evidence of a high standard of living and the Velagić house complex is one of the most valuable of this type in Herzegovina. The town mostly developed along the right bank of river Buna because the left bank is somewhat steeper and less suitable for construction.

Here's the our members favorite photos of "Towns & Villages in Bosnia and Herzegovina". Upload your photo of Blagaj!

Going to Blagaj? Get answers from our friendly locals