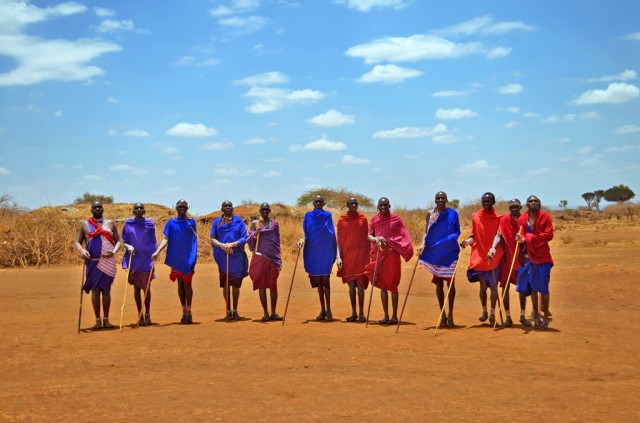 Okay, this isn’t the most poetic title for the whole experience. It’s indescribable, I guess. I’ve been moved. I’ve met the bravest tribe living in this planet. And yes, if you can, you must go to a Maasai village. And I won’t change my mind about it.

While driving towards Amboseli National Park, I was pushing everyone to visit a Maasai Village before going to our hotel. We were in Kenya for almost two weeks and have seen Maasai walking around in Nairobi with their slippers made of tires, colorful beads around their neck and blankets to cover them from the hot scorching sun. They travel mostly by walking because they herd cattle and sell them in the city. I was told most of the Maasai villages that had been there mostly because of tourist. Maasai villages today are not the same Maasai village twenty years ago. (Of course, this statement might be different on far places.) But, still… Still I wouldn’t want to miss this chance to actually see them in reality, actually talk to them and listen to their stories.

They give in and I was delighted. I burst out of the van, smiling and said hi to one of the Maasai. They are always upfront on how much they wanted before you enter their village. When we settled for the price, the Maasai in charge called everyone and greeted us lively. They started by praying (most of them now believe, there is a God out there).  They lined up, men and women, and started humming a rhythm while dancing and jumping as high as they can. We also joined as we thought it was fun and had good laugh. Their voices created such a melody that gives you chills and made me wish I took a video so I could share how beautiful their voices are.

We entered in the village and were introduced to the Maasai doctor. He was telling us how they fight the harsh weather conditions they are living with the herbal medicine that you can find almost everywhere around their village. We were welcomed to their homes and demonstrated how they lived. My eyes were roaming seeing all these beautiful kids around me. They have the marks of a Maasai, a rounded scar on their both cheeks. They look happy and cheery.

The entire tour would not end without them showing the trinkets they sell. Colorful sets of jewelry, carved wood; I was looking at endless line of beautiful things. It was hard to pick any. I settled for a small necklace and asked the Maasai in charge if I can have his belt that he was wearing for a price. He was happy to give it to me and said his wife made it. We waved goodbye but in the back of my mind, I was hoping I could stay longer. I wanted to take more photographs.

The only regret I had when I visited the village was I didn’t carry any gifts for the kids. It would have been nice if I brought some school supplies or clothing.

I always thought, it will be one the highlights of my trip. And it didn’t fail me, it was more. I was lucky to see them. It made me feel how exciting my life is. It made me think of how fortunate I am with these entire things around me most of which I don’t need. That’s one good thing when you travel; it opens your mind on how simple life can be and how pure happiness you achieve just watching the sun setting on a strange place knowing you’re changing.

African Fish Eagles of Lake Naivasha
6 Tips for Tracking the Gorillas of Uganda & ...
The 8 Best Volcanoes to Climb in East Africa
5 Reasons It Might Be a Good Time to Visit Egypt
Categories: Africa, Kenya

About the Author: Ann Urmann

I'm a traveler plus designer.