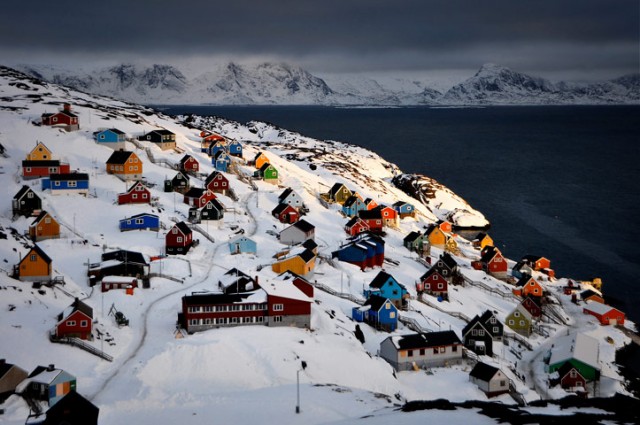 Some of us really need to escape when we travel. Here is a look at what might be some of the world’s most isolated places from Desolation Island in Antarctica to the Canadian Arctic. Most of the world’s polar region remains isolated from human influence as well as a handful of tiny far flung islands. However, even with the densely populated countries of India and China it’s possible to get away from everything in the mountains of Ladakh or the Gobi desert in China. The real question is how far will you go to escape and once you get there will you find what you were looking for.

Casa do Penedo, also known as Stone Castle or a Stone House, is an architectural monument located between Celorico de Basto and Fafe, in northern Portugal. Casa do Penedo is translated in English as Cliff House. It received its name because it was built from four large boulders that serve as the foundation, walls and ceiling of the house. Its construction began in 1972 and lasted about two years until its completion in 1974.

The Bishop Rock is a small rock in the Atlantic Ocean known for its lighthouse. It is in the westernmost part of the Isles of Scilly, an archipelago 45 km (28 mi) off the southwestern tip of the Cornish peninsula of Great Britain. The Guinness Book of Records lists it as the World’s smallest island with a building on it.Bishop Rock is also at the eastern end of the North Atlantic shipping route used by ocean liners in the first half of the 20th century; the western end being the entrance to Lower New York Bay. This was the route that ocean liners took when competing for the Transatlantic speed record, known as The Blue Riband.

The Metéora is one of the largest and most important complexes of Eastern Orthodox monasteries in Greece, second only to Mount Athos. The six monasteries are built on natural sandstone rock pillars, at the northwestern edge of the Plain of Thessaly near the Pineios river and Pindus Mountains, in Central Greece. The Holy Monastery of St. Stephen is a small church built in the 16th century and decorated in 1545. This monastery rests on the plain rather than on a cliff. It was damaged by the Nazis during WWII who believed it was harboring insurgents and was abandoned. Nuns took it over and reconstructed it.

Lukomir is a village in Bosnia and Herzegovina situated in the municipality of Konjic. Lukomir is the highest altitude and most remote village in the entire country.Lukomir sits at an altitude of 1,495 m on the Bjelašnica mountain. Stećci originating from the 14th and 15th century exist at the village and suggest that it was inhabited for hundreds of years. The homes in the area are made of stone while their roofs are composed of wooden tiles. The Rakitnica canyon is located nearby and is said to be the origin of a dragon by local folklore.

The Katskhi pillar is a natural limestone monolith located at the village of Katskhi in western Georgian region of Imereti, near the town of Chiatura. It is approximately 40 metres (130 ft) high, and overlooks the small river valley of Katskhura, a right affluent of the Q’virila.The Katskhi pillar complex currently consists of a church dedicated to Maximus the Confessor, a crypt (burial vault), three hermit cells, a wine cellar, and a curtain wall on the uneven top surface of the column. At the base of the pillar are the newly built church of Simeon Stylites and ruins of an old wall and belfry. …

Elliðaey is the north-easterly most of the Vestmannaeyjar (Westman Islands), an archipelago consisting of 15 or 18 islands (and assorted smaller rocks) located south of Iceland. Contrary to an urban legend, it does not belong to the Icelandic singer Björk. …

Ittoqqortoormiit is located at Scoresby Sound and with its side fjord is the largest fjord complex in the World, as well as the world’s longest fjord. People in Ittoqqortoormiit live in the town itself and there is no longer anybody living permanently in the nearby settlements at Itterajivit/Cape Hope and Uunartoq/Cape Tobin. Only a few tourists come to this remote area, where the winters are long and the sea is frozen for nine months of the year.

Deception Island is an island in South Shetland off the Antarctic Peninsula, which has one of the safest harbours in Antarctica. The island is the caldera of an active volcano, which caused serious damage to the local scientific stations in 1967 and 1969. The island previously held a whaling station; it is now a tourist destination and scientific outpost, with research bases being run by Argentina and Spain. Various countries have previously asserted sovereignty, but it is now administered under the Antarctic Treaty System.

Tristan da Cunha is a remote volcanic group of islands in the south Atlantic Ocean and the main island of that group. It is the most remote inhabited archipelago in the World, lying 2,816 kilometres (1,750 mi) from the nearest land, South Africa, and 3,360 kilometres (2,088 mi) from South America. The territory consists of the main island of Tristan da Cunha itself, which measures about 11.27 kilometres (7.0 mi) across and has an area of 98 square kilometres (37.8 sq mi), along with the uninhabited Nightingale Islands and the wildlife reserves of Inaccessible Island and Gough Island.

Home to approximately 2,060 inhabitants, most of whom are coal mining employees working with Store Norske Spitsbergen Kulkompani, a Norwegian mining firm; Longyearbyen features a Polar climate with cool summers and long, cold winters, most tourists generally arrive here during spring and summer. Spring especially is very popular as snowmobiles can be driven in open country without special permission. However, due to strict environmental laws, not all-of-this main Svalbard Island is accessible to visitors.

Situated in a sort of open sun-drenched crater, this beach is artificial and was created by the explosion of a bomb that landed accidentally in this location during military trials in the past century.[citation needed] Affectionately nicknamed the “hidden beach” or “beach of love” (Playa del Amor), it is accessible only when the tide is low.The Marieta Islands (Spanish: Islas Marietas) are a group of small uninhabited islands a few miles off the coast of Nayarit, Mexico. They are very popular tourist destinations because of the abundant marine life populations due to the islands being protected from fishing and hunting by the Mexican government.

Socotra, also spelled Soqotra, is a small archipelago of four islands in the Indian Ocean. The largest island, also called Socotra, is about 95% of the landmass of the archipelago. It lies some 240 kilometres (150 mi) east of the Horn of Africa and 380 kilometres (240 mi) south of the Arabian Peninsula. The island is very isolated and through the process of speciation, a third of its plant life is found nowhere else on the planet.

Deadvlei is a white clay pan located near the more famous salt pan of Sossusvlei, inside the Namib-Naukluft Park in Namibia. Also written DeadVlei or Dead Vlei, its name means “dead marsh” (from English dead, and Afrikaans vlei, a lake or marsh in a valley between the dunes). The pan also is referred to as “Dooie Vlei” which is the (presumably original) fully Afrikaans name. In Google there are many references to the site, its name often being translated erroneously in terms such as “dead valley”; a vlei is not a valley (which in Afrikaans is “vallei”). Nor is the site a valley; the pan is a desiccated vlei.

Key Gompa also spelled Ki, Kye or Kee is a Tibetan Buddhist monastery located on top of a hill at an altitude of 4,166 metres (13,668 ft) above sea level, close to the Spiti River, in the Spiti Valley of Himachal Pradesh, Lahaul and Spiti district, India. It is the biggest monastery of Spiti Valley and a religious training centre for Lamas. It reportedly had 100 monks in 1855.

One of the World’s most isolated islands situated in the midst of the Atlantic Ocean, Saint Helena is basically of volcanic origin. With a total landscape area covering 122 square kilometers, Saint Helena was an important stop-over point for ships sailing towards Europe from Asia and South Africa.

The 8 Best Volcanoes to Climb in East Africa
Gigantic Diamond Mines – The World’s 1...
10 Amazing Spots to Swim with Dolphins
10 Places You Will Never Get to Visit
Categories: Travel