World
Home » Travel » 20 Amazing Aquariums You Have to Visit
November 6, 2015 by David Urmann

20 Amazing Aquariums You Have to Visit 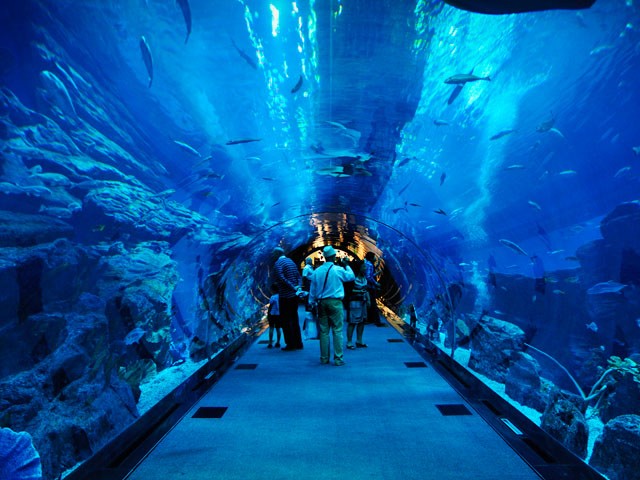 Aquariums offer a window into another world that most of us don’t get to see first hand. When it comes to aquariums it not just about size its about creating an experience for the visitor that brings them into the underwater world while at the same time creating a natural livable habitat for the marine life they enclose. Many aquariums are involved in marine conservation and education efforts. Marine Life Park is the worlds largest holding over 12,000,000 US gal and containing 800 or more different species of marine life. Here is look at the top 20 aquariums you should visit.

The Monterey Bay Aquarium (MBA) is a public aquarium located in Monterey, California, United States. The aquarium was founded in 1984 and is located on the site of a former sardine cannery on Cannery Row. It has an annual attendance of more than two million visitors. It holds thousands of plants and animals, representing more than 600 species on display.

The Oceanarium is an oceanarium in Lisbon, Portugal. The Lisbon Oceanarium’s conceptual design, architecture, and exhibit design was led by Peter Chermayeff of Peter Chermayeff LLC while at Cambridge Seven Associates. It is said to resemble an Aircraft carrier, and is built into the pier on an internal sea.

The Okinawa Churaumi Aquarium is located within the Ocean Expo Park in Okinawa, Japan. It welcomed its 20 millionth visitor on 30 March 2010 and is a member of the Japanese Association of Zoos and Aquariums (JAZA). It was the largest aquarium in the World until it was surpassed by the Georgia Aquarium in 2005.

L’Oceanogràfic is an oceanarium situated in the east of the city of Valencia, Spain, where different marine habitats are represented. The park is divided into ten areas. The marine areas reflect the Mediterranean habitats, the polar oceans – the Arctic, the islands, the tropical seas, the temperate seas and the Red Sea. The park also includes a dolphinarium, an auditorium with a Red Sea aquarium, an area of mangrove swamps and marshland, and a garden with more than 80 different species of plant.

The Aquarium of Genoa is the largest aquarium in Italy and the second largest in Europe. Located in the old harbor area of Genoa, Italy, the 33,000-square-foot aquarium is a member organization of the European Association of Zoos and Aquaria (EAZA), and welcomes more than 1.2 million visitors each year.

The Mall’s Dubai Aquarium and Discovery Centre, developed and operated by Oceanis Australia Group, having one of the World’s largest Acrylic Panel. The acrylic viewing panel is larger than Japan’s Okinawa Churaumi Aquarium, smaller than Singapore’s S.E.A Aquarium and China’s Chime-Long Ocean Kingdom.

uShaka Marine World is a 16-hectare theme park which was opened in 30 April 2004 in Durban, KwaZulu-Natal, South Africa. It comprises 4 sections: uShaka Sea World, uShaka Wet ‘n Wild, uShaka Beach, and uShaka Village Walk. It is located on the strip of land between the beachfront and the harbour.

Marine Life Park is a part of Resorts World Sentosa, Sentosa, Singapore and houses the largest oceanarium in the world. The 8-hectare (20-acre) park houses two attractions, the S.E.A Aquarium and the Adventure Cove Waterpark. S.E.A Aquarium, the world’s largest aquarium, contains a total of 45,000,000 litres of water for more than 100,000 marine animals of over 800 species.

The TurkuaZoo is a public aquarium located in Bayrampaşa in Istanbul, Turkey. It was the first public aquarium in Turkey, and is one of the largest aquariums in Europe. In addition to being a major tourist attraction for Istanbul, the aquarium is a centre for marine research and conservation.

The Shanghai Ocean Aquarium is a public aquarium located in Shanghai, China. Designed by Advanced Aquarium Technologies, the aquarium includes a 120-meter tunnel that takes visitors through a coastal reef, open ocean, a kelp cave, shark cove, and a coral reef, and is one of the longest such tunnels in the World.

The National Aquarium is a non-profit public aquarium located at 501 E Pratt Street in the Inner Harbor area of Baltimore, Maryland in the United States. The aquarium houses several exhibits including the Upland Tropical Rain Forest, a multiple-story Atlantic Coral Reef, an open ocean shark tank, and Australia: Wild Extremes, which won the “Best Exhibit” award from the Association of Zoos and Aquariums in 2008.

Shedd Aquarium is an indoor public aquarium in Chicago, Illinois in the United States that opened on May 30, 1930. The aquarium contains 32,000 animals, and was for some time the largest indoor aquarium in the World with 5,000,000 US gallons of water. Shedd Aquarium was the first inland aquarium with a permanent saltwater fish collection.

The Two Oceans Aquarium is an aquarium located at the Victoria & Alfred Waterfront in Cape Town, Western Cape, South Africa. The aquarium was opened on the 13 November 1995 and comprises seven exhibition galleries with large viewing windows: The enchantment of this particular aquarium is due to its location, where the Indian and Atlantic ocean meet.

The Vancouver Aquarium Marine Science Centre is a public aquarium located in Stanley Park in Vancouver, British Columbia, Canada. In addition to being a major tourist attraction for Vancouver, the aquarium is a centre for marine research, conservation and marine animal rehabilitation.

Cretaquarium or Thalassocosmos is a public aquarium located near the town of Gournes in Crete, Greece, 15 km east of the city of Heraklion.

The Dallas World Aquarium is a for-profit aquarium and zoo located in West End Historic District of downtown Dallas, Texas, USA. The zoo aids conservation and education by housing Many animals that are threatened or endangered as part of a cooperative breeding program with other zoos around the world.