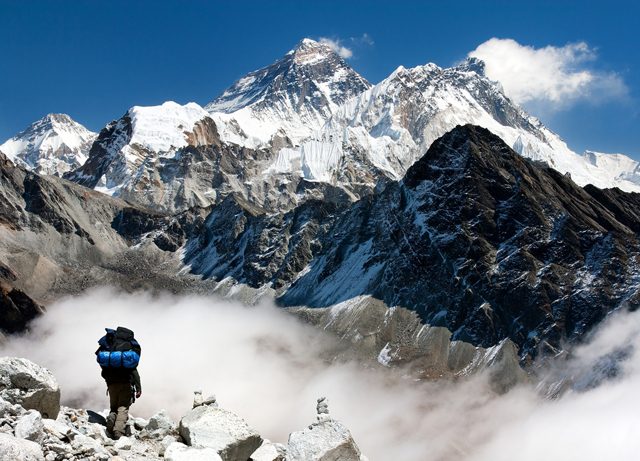 Looking for a great adventure in 2017 here are ten great ideas to get you started. Some of these destinations might seem out of reach but you will be surprised by how affordable and possible they actually are once you start doing some research. If you love mountains a trip to Everest in the Himalayas or the Columbia Ice Field in the Canadian Rockies are sure to be top picks. For sheer thrills consider diving the Barrier Reef or Bungee jumping in New Zealand. Here is a look at 10 great pick for 2017.

The Great Barrier Reef is the World’s largest coral reef system composed of over 2,900 individual reefs and 900 islands stretching for over 2,300 kilometres (1,400 mi) over an area of approximately 344,400 square kilometres (133,000 sq mi). The reef is located in the Coral Sea, off the coast of Queensland, Australia. The Great Barrier Reef has long been known to and used by the Aboriginal Australian and Torres Strait Islander peoples, and is an important part of local groups’ cultures and spirituality. The reef is a very popular destination for tourists, especially in the Whitsunday Islands and Cairns regions.

Mount Everest is the Earth’s highest mountain, located in the Mahalangur section of the Himalayas. Its peak is 8,848 metres (29,029 ft) above sea level and the 5th furthest point from the centre of the Earth. The international border between China and Nepal runs across the precise summit point. The highest mountain on the Earth attracts many well-experienced mountaineers as well as capable climbers willing to hire professional guides. While not posing substantial technical climbing challenges on the standard route, Everest presents dangers such as altitude sickness, weather and wind.

Lake Louise is a hamlet in Banff National Park in the Canadian Rockies, known for its turquoise, glacier-fed lake ringed by high peaks and overlooked by a stately chateau. Hiking trails wind up to the Lake Agnes Tea House for bird’s-eye views. There’s a canoe dock in summer, and a skating rink on the frozen lake in winter. The Lake Louise Ski Resort features a wildlife interpretive center at the top of a gondola.

The Salkantay Moab is a city in Grand County, in eastern Utah, in the western United States. It is the county seat and largest city in Grand County. Moab hosts a large number of tourists every year, mostly visitors to the nearby Arches and Canyonlands National Parks. The town is a popular base for mountain bikers who ride the extensive network of trails including the famed Slickrock Trail, and off-roaders who come for the annual Moab Jeep Safari.

Santa Grand Cayman is the largest of the Cayman Islands, a British Overseas Territory in the Caribbean. George Town, its capital, is home to the Cayman Islands National Museum, dedicated to Caymanian heritage. The city is also a major cruise-ship port and site of the ruins of colonial-era Fort George. Beaches and vibrant coral reefs are the island’s hallmarks. The island’s most famous excursion is to Stingray City, where boatloads of tourists debark at nearby Stingray Sandbar and squeal nervously while adjusting to the presence of large rays, which they can feed and “pet” while snorkeling in waist-deep water.

Showcasing a bewilderingly diverse flora, fauna and landscape, Costa Rica is one of the most popular eco-tourism destinations in the entire World. Blessed with an extraordinary wealth of things to do in this country, Costa Rica features some of the best beaches some of the great beaches along the Caribbean Sea and the North Pacific Ocean. Apart from witnessing an exquisite wildlife, some of the favorite tourist activities offered by Costa Rica include rafting, fishing, surfing, biking and golf.

Rio de Janeiro is the second largest city in Brazil, on the South Atlantic coast. Rio is famous for its breathtaking landscape, its laid back beach culture and its annual carnival. The Hangliding and Paragliding flights have found in Rio de Janeiro, the ideal land for its high hills and favorable wind. Different from other places in the world, in Rio, the sport could be done in urban areas and landing on the beach! These conditions naturally attract many tourists who get the courage to enjoy a flight.

The Aeolian Islands or Lipari Islands are a volcanic archipelago in the Tyrrhenian Sea north of Sicily, named after the demigod of the winds Aeolus. The locals residing on the islands are known as Eolians (Italian: Eoliani). The Aeolian Islands are a popular tourist destination in the summer, and attract up to 200,000 visitors annually. The largest island is Lipari. The other islands include Vulcano, Salina, Stromboli, Filicudi, Alicudi, Panarea and Basiluzzo.

Queenstown is a resort town in Otago in the south-west of New Zealand’s South Island. It is built around an inlet called Queenstown Bay on Lake Wakatipu, a long thin Z-shaped lake formed by glacial processes, and has spectacular views of nearby mountains. There are various apocryphal accounts of how the town was named, the most popular suggesting that a local gold digger exclaimed that the town was “fit for Queen Victoria”. It is now known for its commerce-oriented tourism, especially adventure and ski tourism. It is popular with young international and New Zealand travellers alike.