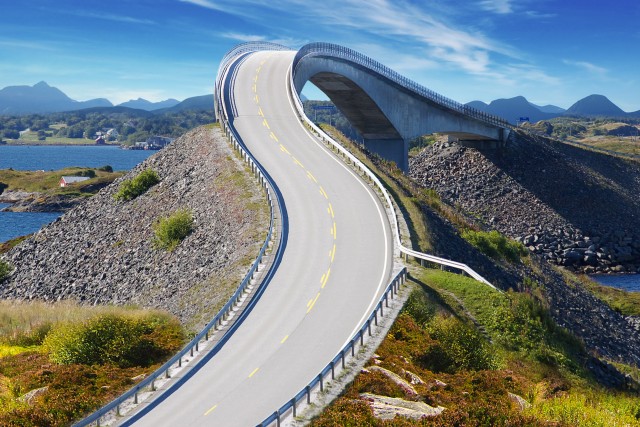 Looking for a road trip that will leave you breathless? We picked some of the world’s greatest roads some of them are downright scary, some feature amazing scenery and some of the routes are so remote that you might be the only traveler. We also considered roads that were unique for their construction such as the Atlantic Road in Norway.

The Atlantic Road at 5 miles in length but isn’t the longest but its remarkable enough to be the 9th largest tourist draw in Norway. The route won the title “Norwegian Construction of the Century”, in 2005 and was named by The Guardian (a British newspaper) as one of the world’s best road trips. The route traverses the low islands between Molde and Kristiansund. The Storseisundet Bridge is the tallest and highlights the artistic building techniques of the highway. Some visitors come to the road in the fall to witness the dramatic storms that pound the region.

The Dades Valley Road is a stunning drive through the Atlas Mountains of Morocco. As if the desert landscapes and steep cliffs were not enough to occupy the senses the highway passes hundreds of ancient Kasbahs. These ancient fortified dwellings served as places where local leaders could retreat in times of attack from roving bands and foreign invaders. The length of the road through the spectacular canyon is 35kms (22-mile).

Highway 12 stretches approximately 65 miles from Torrey to Escalante in Utah. The road reaches over 3000m as it climbs to the summit of Boulder Mountain where visitors can see the expanse of the desert beyond and the entirety of Capital Reef National Park. The real highlight of the road is between Boulder and Escalante where the road traverses the slick rock and barren exposures of Navajo Sandstone before descending to the Escalante River.

The Pan-American Highway from Lime to the border at Tacna traverses some of the driest desert in the world. The only villages are seen along the rivers that reach the coastal regions after leaving the Andes. The miles of empty and desolate coastline between Nazca and Camana encourage the traveler onward. The road is not without its mysterious attractions whether it the lines at Nazca or the ruins of Tambo Colorado.

The impressive Mount Fitzroy lies a short distance off Route 40 at the small town of El Chalten. The highway is the longest in Argentina and one of the longest continuous highways in the world. The southern part of the route is a largely unpaved road that travels parallel the eastern slope of the Andes. The distance, remoteness and unequaled scenery of the highway is a draw to adventurers from around the world.

Trollstigen pass with a steep incline of up to 9% and eleven hairpin turns has become a popular tourist attraction in Norway. The pass only reaches an elevation of 850 metres (2,790 ft) but the route up is impressive. At 700 meters drivers can park and use the viewing platforms to catch a glimpse of Stigfossen falls. The road is open from May to October before it is closed for the winter.

The Yungas road which is better known as the Death Road is a 61km (38mi) route connecting La Paz (Boliva) to Coroico. It first climbs and reaches a high point at La Cumbre Pass (4,650m) before descending 1,200m to the town of Corocio. It’s a largely a single lane road with no guard rails and sheer cliffs off the side of up to 600m. In the rainy season visibility can be poor in the fog and the road can be muddy and littered with rockfalls. Maybe we should have left this one off the list.

Previous postKailash Mansarovar Yatra Next postYou have to go to Maasai Village!