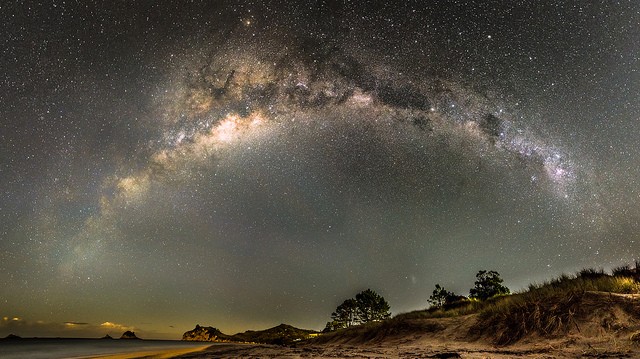 It’s time to escape the light and noise pollution of the big cities. Even cities of moderate size generate enough light pollution that its difficult to see everything but the brightest stars and the moon. If you truly want to see the night sky at its best you need to get away from everything and everyone. The best places to see the night sky are not just remote they also have clean air, low humidity and often at high elevation. The Atacama Desert and surrounding volcanoes in Chile fits this bill and are also home to some of the world’s largest telescopes. Mauna Kea in Hawaii is also famous for its observatories. Remember you don’t have to travel the world to see the night sky you might just need to drive a few hours away from the city to get away from all the lights and enjoy the stars.

1. Tenerife on the Canary Islands

Tenerife is the largest and most populous island of the seven Canary Islands; it is also the most populated island of Spain. About five million tourists visit Tenerife each year, the most of any of the Canary Islands. It is also one of the most important tourist destinations in Spain. Tenerife hosts one of the World’s largest carnivals and the Carnival of Santa Cruz de Tenerife is attempting to become a World Heritage Site.

The Atacama Desert is a plateau in South America, covering a 1,000-kilometre (600 mi) strip of land on the Pacific coast, west of the Andes mountains. It is the driest non-polar desert in the world. Most people who go to tour the sites in the desert stay in the town of San Pedro de Atacama. The Atacama Desert is in the top three tourist locations in Chile. The specially commissioned ESO hotel is reserved for astronomers.

3. The Headlands in Michigan, USA

The Headlands is a 550-acre (220 ha) county park in the U.S. state of Michigan. The park preserves over two miles (3 km) of undeveloped Lake Michigan shoreline south and west of McGulpin Point Light in the Straits of Mackinac.

Golden Gate Highlands National Park is located in Free State, Republic of South Africa, near the Lesotho border. The park’s most notable features are its golden, ochre, and orange-hued deeply eroded sandstone cliffs and outcrops, especially the Brandwag rock. Another feature of the area is the numerous caves and shelters displaying San rock paintings. Wildlife featured at the park includes mongooses, eland, zebras, and over 100 bird species.

Aoraki/Mount Cook National Park is in the South Island of New Zealand near the town of Twizel. Aoraki/Mount Cook, New Zealand’s highest mountain and Aoraki/Mount Cook village lie within the park. The area was gazetted as a national park in October 1953 and consists of reserves that were established as early as 1887 to protect the area’s significant vegetation and landscape.

Mauna Kea also called Mauna a Wākea in Hawaiian culture, is a dormant Volcano on the island of Hawai’i. Standing 4,205 m above sea level, its peak is the highest point in the state of Hawaii. Much of the mountain is under water; when measured from its oceanic base, Mauna Kea is over 10,000 m tall, significantly taller than Mount Everest.

Exmoor is loosely defined as an area of hilly open moorland in west Somerset and north Devon in South West England. It is named after The River Exe, the source of which is situated in the centre of the area, two miles north-west of Simonsbath. Exmoor is more precisely defined as the area of the former ancient royal hunting forest, also called Exmoor.

Cherry Springs State Park is a 82-acre (33 ha)[a] Pennsylvania state park in Potter County, Pennsylvania, in the United States. It is popular with astronomers and stargazers for having “some of the darkest night skies on the east coast” of the United States, and was chosen by the Pennsylvania Department of Conservation and Natural Resources (DCNR) and its Bureau of Parks as one of “25 Must-See Pennsylvania State.

Kelvin Heights, also called the Kelvin Peninsula, is a suburb of the town of Queenstown in the South Island of New Zealand. Most of the housing of this suburb is near Peninsula Road and is at the base of Peninsula Hill. It is one of the most expensive suburbs in New Zealand in which to buy a house, with the median house value at about NZ$1 million in 2005.

The Williamson Diamond Mine is a diamond mine south of Mwanza in Tanzania; it became well known as the first significant diamond mine outside of South Africa. Over its lifetime it has produced over 19 million carats (3,800 kg) of diamonds.

Tuscany is a region in central Italy known for its landscapes, traditions, history, artistic legacy and its influence on high culture. It is regarded as the birthplace of the Italian Renaissance and has been home to many figures influential in the history of art and science, and contains well-known museums such as the Uffizi and the Pitti Palace.

Big Bend National Park in the U.S. state of Texas has national significance as the largest protected area of Chihuahuan Desert topography and ecology in the United States. It contains more than 1,200 species of plants, more than 450 species of birds, 56 species of reptiles, and 75 species of mammals.

20 Amazing Mountain Peaks & Photos
15 Badlands That You Have to See to Believe
10 Places You Will Never Get to Visit
Our First Travel Blog Roundup
Categories: Travel