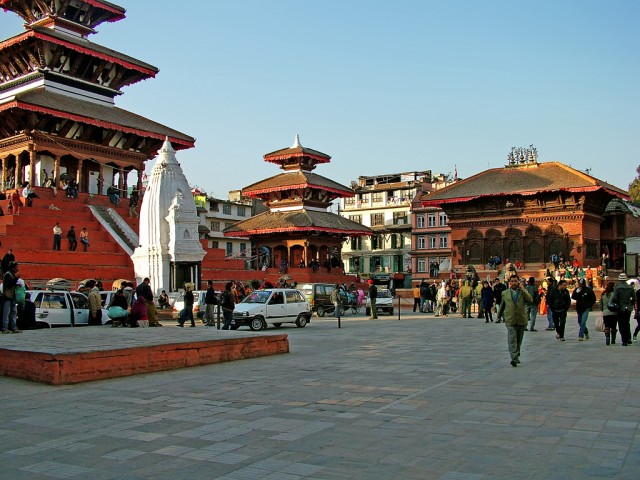 Kathmandu Durbar Square, or locally known as Hanuman Dhoka, is a photographer’s delight. Once a resident of Nepal’s Royal Family, this square comprises courtyards, palaces, and temples which showcase the skills of the Newar artist and craftsmen over several centuries. Though the place is beginning to lose its charm due to poor maintenance, it is still a pretty place for people watching if you don’t mind the crowd. It is best to see this place in late afternoon when you can see locals having their free time with friends, vendors selling everything from trinkets to vegetables, painters trying to capture moments, or travelers like you who found a time to relax and inhale the scene.

Nowadays, Basantapur Chowk is filled with vendors selling their Ritual Objects to locals and tourists.

Buddha statues, prayer beads and other ritual objects attract passersby to look around and buy a thing or maybe two.

If you like puppets, this one is a keeper. This traditional puppet reflects Nepalese culture and lifestyle. All of them are colorful, carved and handmade.

Kumari Ghar is the House of the Living Godess, Kumari. They were selected from the Shakya or Bajracharya clan of the Nepalese Newari community. The Kumari is revered and worshiped by some of the country’s Hindus as well as the Nepali Buddhists.

Trailokya Mohan(Left) and Maju Deval(Right) are one of the many Hindu Temples in Kathmandu Square. Build within 16th and 17th centuries. both were made like Pagoda with intricate wood carving exteriors.

Nepalese loves sitting at Durbar Square in their free time especially during Winter.

Kala Bhairava is a very important deity on the Newars, which is why it is no wonder that this statue was moved by King Pratap Malla when it was discovered in a paddy field during 17th century.

Hanuman Dhoka is the Hanuman Gate of Durbar Square.

Most of Sadhus are usually waiting for travelers for photo snaps around this area. This Sadhu is ready for photo-op while wearing his favorite yellow robe.

Each of the structure has a very intricate wood carving. It is one of the favorite rest area of locals.

It’s a girls day out for these ladies.

Lady in front of Mahendreshvara Temple.

Mahendreshvara Temple is dedicated to Shiva in the form of Pashupati.

Everest Base Camp, Khumbu Glacier and Ice Fall. Discover the culture of the Sherpas and explore the monasteries and engravings of the Tibetan Buddhists. Including Everest you will see 3 of the worlds 10 tallest peaks which also include Cho Oyu (8201m/26,906ft), Lhotse (8,516m/27,940ft)…

About the Author: Ann Urmann

I'm a traveler plus designer.

Previous postGalle, Sri Lanka - Take me Back in Time Next postOh my Holi! Festival of Colors