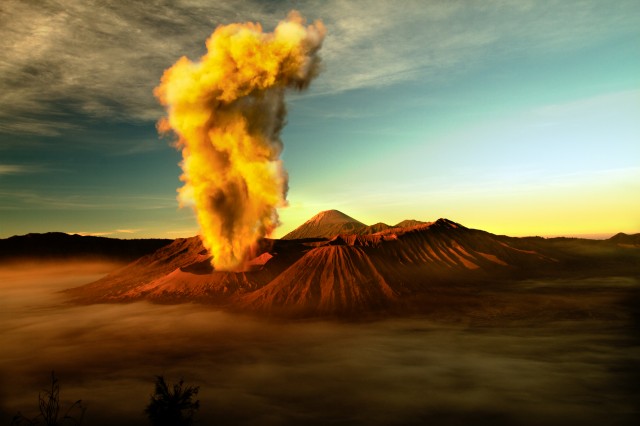 The rugged volcanic landscape around Mount Bromo is itself reason enough to visit Indonesia. It’s relatively easily accessible and an easy hike to the view points around Bromo. The more adventuresome can plan a two day overnight trek to Mount Semeru (the highest in Java at 3,676 m).

Mount Bromo (2,329 m) is not the tallest peak of the Tengger massif but it is the most well know and most visited. Mount Bromo sits inside the larger Tengger caldera which stretches nearly 10km across and is surrounded by Laut Pasir a sea of volcanic sand which stands in stark contrast to the verdant green valley’s around the volcano.

Nearby Mount Semeru is much taller is ones of Indonesia’s most active volcanoes periodically erupts and the mountain is often closed due to volcanic activity. It’s a challenging 2 day climb to the top but not technically difficult. Even from afar the volcano captivates visitors with its almost regular activity. Climbing Mount Semeru requires some planning and a permit from the national park authority.

Its relatively easy to reach Mount Bromo. Direct flights from Jakarta and Bali regularly fly to Surabaya the capital of East Jave. It’s about a 4 hour drive in total from Surabaya. One first heads to Probolinggo the nearest larger town from Surabaya and then onward to Cemoro Lawang. A number of basic hotels and guest houses can be found around Cemoro Lawang. The restaurants open near 3am to accommodate those heading to the peak to see the sunrise.

The climate is quite comfortable as daytime temperatures rarely exceed 20°C. However it can get quite cold at night as temperatures commonly drop to 5°C or even slightly lower. The wet season is November to March and heavy rains in January and February can make parts of the park inaccessible.

The last significant eruption was near the end of 2010 and continued periodically into the early part of 2011.Continuous eruptions on 21 January caused a thin ash fall mainly in the village area of Ngadirejo and Sukapura Wonokerto, Probolinggo district. The impact of the heavy rain and volcanic ash from eruptions during December 2010 and January 2011 resulted in disruption to normal activities and the local economy.