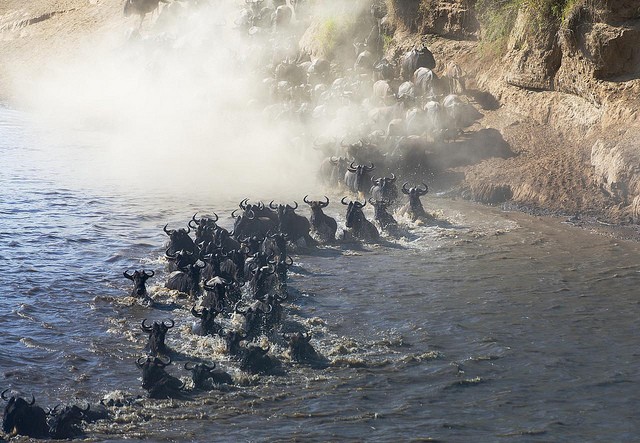 Here is a look at some of the best safari’s in 2017 from India to Africa. Maasai Mara is one of the top choices in East Africa and July is the best time to visit when thousands of wildebeest migrate across the crocodile infested Mara River. Kruger National Park is the most visited park in South Africa and hosts an amazing diversity of wildlife across a number of environments. To get off the beaten track consider Hwange National Park in Zimbabwe or Okavango Delta in Botswana or if you are thinking beyond Africa try spotting one of India’s elusive tigers in either Corbett or Bandhavgarh.

Maasai Mara National Reserve is located in the south west of Kenya and west of the capital Nairobi. The Maasai Mara National Reserve is each year visited by thousands of tourists, who come here to watch the many different wildlife and birdlife species in the reserve. The reserve is especially famous for the high amount of predators, such as lions and cheetah, and the 1.5 million wildebeest which migrate through the Mara and cross the crocodile infested Mara river.

Serengeti National Park is a large conservation area located in the north of Tanzania. The park flows over into neighboring Kenya where it’s known as the Masai Mara. The park is but one of several conservation areas within the Serengeti region of East Africa, though a vitally important one. As well as conserving wildlife, flora and iconic landscapes, Serengeti National Park has emerged as a major traveller and tourist destination, many making the journey there to engage in safari.

The Chobe National Park is located in the north-west of Botswana, near the borders to Zambia, Zimbabwe and Namibia and is famous for its vast variety of wildlife. It attracts thousands of visitors every year due to its fame as one of the largest game concentrations in the country. Not only this, but this wildlife sanctuary also boasts the largest elephant population in Africa both in number and size.

Ngorongoro Conservation Area is a park in the Northwest Tanzania. It contains an old volcano that has collapsed and formed a crater (caldera). The steep sides of the crater have become a natural enclosure for a wide variety of wildlife. Lions are in the highest density in the world in the crater, so there is a good chance of seeing them. There are herds of wildebeest, zebra, and a lot of buffalo and Grants’ gazelles too.

Moremi Game Reserve is a Game Reserve in Botswana. It rests on the eastern side of the Okavango Delta. The Moremi Game Reserve, although not one of the largest parks, presents insights and views even for the most experienced of travelers. It is home to nearly 500 species of bird (from water birds to forest dwellers), and a vast array of other species of wildlife, including buffalo, giraffe, lion, leopard, cheetah, hyaena, jackal, impala, and red lechwe.

Jim Corbett National Park is in the State of Uttarakhand in the Himalayan North region of India. The park is open to visitors from mid-September to mid-June. Once inside the park, one gets to enjoy a spectacular panorama of the jungle, reminding one of Kipling’s Jungle Book. Apart from this, one can see, observe, and photograph several many species of birds, mammals, reptiles, flora, etc.. The Corbett National Park has been the hot favorite getaway for the tourists, wildlife fans, and adventure seekers since many years.

Kafue National Park is in the Kafue River Basin of Zambia. It is approx. 22,400 square km and is one of the largest parks in the country and the world. Kafue is extremely rich in animal life. Hippo abound in the rivers with good sightings of huge crocodiles. Many species of birds, large and small are abundant. Elephant too are on the come-back after extensive poaching and are frequently seen along the river banks and even venture into the camps and lodges.

Madidi National Park is in the northwest of the La Paz Department of Bolivia. Madidi is one of the most biologically diverse protected areas on the planet. The park is home to over 1,000 bird species, representing a whopping 11% of the world’s 9,000 bird species. Madidi contains large populations of Latin America’s most charismatic wildlife species: jaguar, spectacled bear, maned wolf, vicuña, giant otter, Andean condor and military macaw, among others. The newly discovered monkey species lives in Madidi and nowhere else.

Bandhavgarh National Park is located in Madhya Pradesh state of India. This park is among the best national parks of India where Asian tigers can be easily viewed. Although Bandhavgarh is a relatively small park in the last few years this former game reserve has become one of India’s most prominent National Parks. The major reason for all the interest is Bandhavgarh’s high density of tigers (The Bagh), which roam the mixed forests of in search of an easy kill.

South Luangwa National Park is in eastern Zambia. Called by some as one of the greatest wildlife sanctuaries in the world, South Luangwa is one of Zambia’s main draws. The park is centered around the Luangwa River and is home to one of Africa’s largest concentrations of wildlife. Thanks to its inaccessible location, South Luangwa manages to combine immense density of wildlife with limited visitor numbers, and it’s also one of the few national parks that allow night safaris.

Yala National Park is the most visited and second largest national park in Sri Lanka. Actually it consists of five blocks, two of which are now open to the public; and also adjoining parks. It is situated in the southeast region of the country, and lies in Southern Province and Uva Province. The park is best known for its variety of wild animals. It is important for the conservation of Sri Lankan Elephants and aquatic birds.

Hwange National Park is the largest game reserve in Zimbabwe. The park lies in the west, on the main road between Bulawayo and the widely noted Victoria Falls. The Park hosts 105 mammal species, including 19 large herbivores and eight large carnivores. All Zimbabwe’s specially protected animals are to be found in Hwange and it is the only protected area where gemsbok and brown hyena occur in reasonable numbers. The population of African wild dogs to be found in Hwange is thought to be of one of the largest surviving groups in Africa today.

Amboseli National Park is in Kajiado District, Rift Valley Province in Kenya. The local people are mainly Maasai, but people from other parts of the country have settled there attracted by the successful tourist-driven economy and intensive agriculture along the system of swamps that makes this low-rainfall area one of the best wildlife-viewing experiences in the World with 400 species of birds including water birds, pelicans, kingfishers, crakes, hammerkops and 47 types of raptor.

Tarangire National Park is a national park in Tanzania. t lies a little distance to the south east of Lake Manyara and covers an area of approximately 2,850 square kilometers. The park is famous for its huge number of elephants, baobab trees and tree climbing lions. Visitors to the park can expect to see any number of resident zebra and wildebeest in addition to the less common animals. Other common animals include waterbuck, giraffe, and olive baboons.

Etosha National Park is the 2nd largest of Namibia’s game reserves. It spans 20,000km² in Northern Namibia. The park surrounds the Etosha salt pan, which attracts animals, particularly in the drier winter months, because it is a source of water in a very dry land. Wildlife that can be seen here include: Rhinos, Lions, Zebra, Giraffes, Gemsbok, Springbok, Wildebeest, Elephants, and Jackals.

Situated in the Indian state of Madhya Pradesh, Kanha National Park is one of the most beautiful and well managed of all national parks in India. It is well known not only within the tourists, natural history photographers and wildlife lovers but also to public at large. Tourist throng here to see the magnificent big cat Tiger and one of the rarest deer the Hard ground Barasingha (Swamp Deer) also known as the – Jewel of Kanha national park. Many endangered species have indeed been saved here.

Udawalawe National Park lies on the boundary of Sabaragamuwa and Uva Provinces, in Sri Lanka. The park is 165 kilometers from Colombo. Udawalawe is an important habitat for water birds and Sri Lankan Elephants. It is a popular tourist destination and the third most visited park in the country. Udawalawe is an important habitat for Sri Lankan Elephants, which are relatively easy to see in its open habitats. Many elephants are attracted to the park because of the Udawalawe reservoir, with a herd of about 250 believed to be permanently resident.

Amber Mountain National Park is a National Park in the Diana Region of northern Madagascar. The park is known for its water falls and crater lakes and is located 1000 km north of the capital, Antananarivo. It is also one of the most biologically diverse places in all of Madagascar; 75 species of birds, 25 species of mammals, and 59 species of reptiles are known to inhabit the park.

15 Amazing Natural Arches and Bridges
6 Tips for Tracking the Gorillas of Uganda & ...
Panoramic View of TajMahal
The World’s 25 Most Beautiful Valleys
Categories: Travel